Freed from Muammar Gaddafi’s 42-year dictatorship, Libya’s Sufi Muslims find themselves under renewed pressure . . .[restrict]from violent Islamists who have been attacking them and their beliefs as heretical. 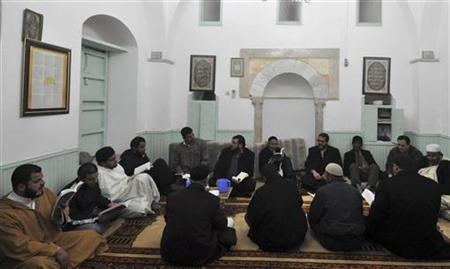 The desecration of graves belonging to Sufi saints and sages in recent months have put the peaceful Sufis on the defensive, prompting some to post armed guards at their mosques and lodges to ward off hardline thugs.

But the birthday of Islam’s Prophet Mohammad, one of the highpoints in the Sufi calendar, is on Saturday and Libyan Sufis are determined to take their traditional processions through the streets to show they will not be cowed.

At a meeting of Sufi scholars to plan the celebrations, Sheikh Adl Al-Aref Al-Hadad said even being driven out of his zawiyah (Islamic school) late last year by Islamists known as Salafis would not deter him from marching.

“I’m worried but I’m not afraid,” said Al-Hadad, whose Tripoli school was stormed by armed men who burned its library, destroyed office equipment and dug up graves of sages buried there. They turned the school into a Salafi mosque.

On Jan. 13, extremists crashed a bulldozer through the walls of the old cemetery in the eastern city of Benghazi, destroyed its tombs and carried off 29 bodies of respected sages and scholars. They also demolished a nearby Sufi school.

Sheikh Khaled Mohammad Saidan, whose Dargut Pasha Mosque faces Tripoli’s port, said most Islamists in post-Gaddafi Libya disagreed with Sufis, but peacefully. “But there are no police around and you never know what some people might do,” he added.

Sufi lodges from around Tripoli will march on Saturday through narrow alleys of the walled old town, waving flags and chanting poems in praise of Mohammad to the beat of cymbals, drums and tambourines.

To the puritanical Salafis, these practices amount to bida (innovation) and shirk (idolatry), both grave sins that must be stopped, by force if necessary.

Sufism, a mystical strain in both Sunni and Shi’ite Islam, dates back to the early days of the faith. Apart from their prayers, Sufi devotions include singing hymns, chanting the names of God or dancing to heighten awareness of the divine.

Revered saints, scholars and holy people are buried in shrines and some are honoured with annual pilgrimages. While many Islamic scholars say this is admissible, puritanical schools of Islam such as Saudi Arabia’s Wahhabis or the Afghan Taliban consider it heretical.

As pious and peaceful believers, Sufis have been easy targets for violent Islamists seeking political power. The Pakistani Taliban have attacked Sufi shrines and mosques there in recent years and Salafi attacks on Sufis broke out last year after Egypt’s protesters toppled President Hosni Mubarak.

Gaddafi had a bizarre and fickle relationship with Islam, using it when it boosted his authority but suppressing it whenever faith seemed to be the first step towards dissent. At one point in the 1980s, anyone going to morning prayers in a mosque risked arrest as a religious extremist.

The dictator denied there was a split between Sunnis and Shi’ites. He blew hot and cold on the Prophet’s birthday event known as Mawlid, sometimes limiting it in Libya but leading mass celebrations in African cities in his self-appointed role as a pan-African and pan-Islamic leader.

Traditional religious schools were shut and religious education was reduced to a few basics about Islam and heavy emphasis on memorising the Koran.

Gaddafi even abolished the Dar al Ifta, the central authority for issuing religious rulings or fatwas, and Libya offered no such advice to its Muslims from 1978 until the office was restored after rebels chased him from power last August.

“He did everything but give people carpets and say pray to him rather than Allah,” one imam remarked.

All this undermined Libya’s traditional Islam, a balanced Sunni version with Sufi influences. Some Muslims began looking abroad for inspiration, especially to Saudi Arabia, and brought back a more austere Islam that mixed up the religious landscape.

“Nobody knows anymore what they are,” said Sufi theologian Aref Ali Nayed when asked what the majority was in Libyan Islam. “We have 42 years of Gaddafi to thank for that.”

Libya’s Sufis also worry they are being outflanked politically. Many new religious officials have Salafi leanings, they say, and are appointing Salafi imams to mosques vacated by pro-Gaddafi preachers. Salafi preaching is now widespread on Libyan television and radio, they say.

Salafis have also begun denouncing traditional imams to the authorities, prompting them to be replaced by hardliners. “About half the imams here have been replaced by Salafis,” said one imam at a large Tripoli mosque where Salafis in the congregation are campaigning against celebrating Mawlid.

Political parties are starting to form, including the Muslim Brotherhood. Libyan Salafis have not yet announced if they plan to launch a party and contest elections, as in Egypt.

Sheikh Mohammad Jafari, whose mosque is pockmarked from the fighting over Gaddafi’s Bab Al-Azizaya compound just across the street, said Sufis had to stand up for their beliefs.

“Sufis uphold the values of love and brotherhood,” he said. “We believe in dialogue and difference of opinions. We want to build a Libya of diversity.”