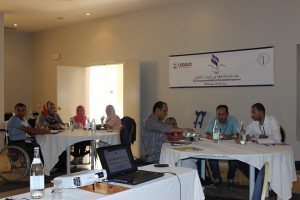 A four-day round table . . .[restrict]with people with disabilities (DPOs) on their inclusion and accessibility in Libya’s electoral process took place in Djerba, Tunisia between 27-30 July.

The round table aimed to identify, with the suggestions of the DPOs, the barriers persons with disabilities face during elections, as well as to elaborate the measures and actions in order to overcome them and make elections accessible.

The round table was organized as part of the technical assistance to Libya carried out by the International Foundation for the Electoral System (IFES), with the goal to assist civil society as well as the High National Electoral Commission (HNEC) in the organization and implementation of free and fair elections in Libya.

The event, which was opened by IFES Libya’s Chief of Party, Mrs. Samia Mahgoub, was attended by 25 participants, among members of Zaykum Zayna and of other Libyan DPOs like The Association of Libyan Heroes, The National Libyan Organization for the Development of People with Disabilities, La Taya’ Sau , and Amal: Association for deaf persons.

During the four days, participants and lecturers were engaged in constructive discussions on the role DPOs can play at all the stages of the electoral process to advocate and collaborate with institutions to make elections inclusive and accessible.

International standards on accessible elections, best practices, political rights of persons with disabilities, the electoral cycle, how to sensitize decision makers and society on inclusion and accessibility, and how to monitor participation of persons with disabilities in Libya’s elections were the topics discussed at length by the participants.

As an outcome of the round table, an Election Accessibility Action Plan was formulated, which will be distributed in both Arabic and English versions. This document is aimed at HNEC, DPOs, decision makers, political parties, and institutions, to help identify key issues that currently affect the access and participation in Libya’s democratic process of persons with different types of disabilities.

The Plan also defines a series of actions and tools necessary to overcome the identified barriers in the pre and post-electoral periods, and offers a set of recommendations for the implementation of these measures.

“Participation in a democracy cannot be limited to those who have either the knowledge or physical ability to access the electoral process. This round table is an important step in the promotion of inclusive and accessible elections in Libya. IFES Libya is pleased to closely collaborate with Libyan DPOs in the elaboration of the Election Accessibility Action Plan.” IFES Libya Chief of party Samia Mahgoub said.

The workshop was organized by IFES Libya and is funded by USAID. [/restrict]