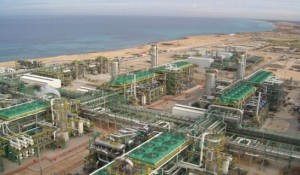 There are reports that the Mellitah . . .[restrict]Oil and Gas processing plant at Mellitah has been taken over by armed men from a group calling itself the ‘Revolutionaries of the Western Area’.

It is understood that 35 vehicles entered the plant on Sunday night.

The group has issued a repetitious nine-point statement in which it accuses the GNC and the Tripoli government of security failings and warns that there should be no outside military intervention in Libya. They claimed they had moved in to the complex “to protect” it. According to locals in nearby Zuwara, they also claimed to be “reinforcements” after the kidnapping of four Italians there some months ago.

Sources have also told the Libya Herald that the group consists of men from Sabratha, Zawia, Sorman and Tripoli but no one from Misrata.

It is not known what has happened to any local or expatriate staff at the plant nor if it is still processing gas.

A senior media manager at NOC offices in Tripoli has denied the report. It was incorrect, he said.

Yesterday there was a car bomb attack near the Mellitah Oil and Gas HQ building in Tripoli. [/restrict]