Libyan Wings ready to take to the air 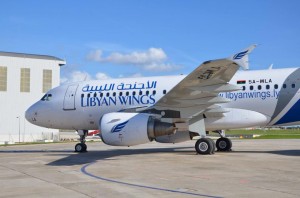 After a series of false starts, the country’s . . .[restrict]newest airline, Libyan Wings, is scheduled to take off for the first Istanbul-bound flight on September 21. The airline announced the launch on its Facebook page.

Libyan Wings has been attempting to fly since last year, but the political turmoil and the fighting in and around Tripoli prevented the startup company getting off the ground.

At present, the carrier’s website is not up and running and customers cannot book flights on-line. However, they can purchase tickets through the Libyan Wings sales office in Tripoli and from travel agents.

Edgardo Badiali, Libyan Wings’ CEO, had recently hoped that the situation in Tripoli would stay relatively calm for the launch of the carrier.

The security situation in the capital, however, has been deteriorated since yesterday when a group of armed men stormed the General National Congress and Islamic State fighters penetrated the Mitiga Airport on this morning.

Libyan Wings is said to be owned by Abdul Hakim Belhaj, the former Libyan Islamic Fighting Group commander who still heads the Nation Party. He is also reported to own Al-Nabaa TV. [/restrict]