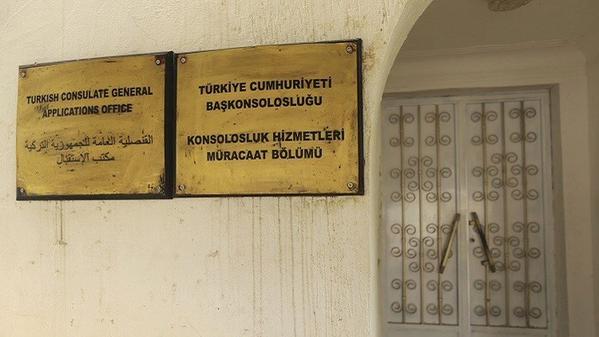 The Turkish . . .[restrict]consulate in Misrata, Turkey’s sole remaining diplomatic presence in Libya, has closed after a grenade was thrown at it early this morning.

Confirming the attack, a Turkish official told the Libya Herald that the grenade hit an outer wall. There had been no injuries or damage, he said.

No one has claimed responsibility but the attack is thought to relate to Turkey’s new visa regulations for Libyans. These came into effect last Thursday. However, many Libyan travellers to Istanbul were either unaware of them or felt they could ignore them with the result that they were refused entry to Turkey when they arrived there.

It is not known why the Libyan airlines allowed them to fly when they did not have valid visas.

The closure of the consulate comes just a day after it had started accepting visa applications following the Eid holiday. Ironically, yesterday also saw the foreign minister in the Tripoli “government”, Mohamed Ghirani, meeting the Turkish consul in Misrata to discuss easing the visa regulations. He had asked the Turks to allow travel agencies to apply for travellers’ visas.

According to the Turkish official, it is hoped to reopen the consulate once there have been talks with the local authorities and Ankara feels that security can be assured. “We will be flexible,” he said. “We’re not closing the door to Libyans.” The closure was purely a temporary measure.

From Thursday until today, Libyans could either obtain a visa in Misrata or from Turkish consulates in Egypt, Jordan or Tunisia. For the time being, visa applicants will have to travel abroad, apart from those with EU Schengen visas, who can apply online. [/restrict]