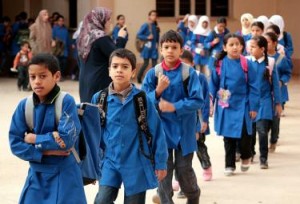 Striking teachers in Libya Dawn-controlled areas have . . .[restrict]been offered a small a pay rise but may be further angered by the far larger salary increases being given to headmasters, inspectors and education officials.

Teachers in various parts of Tripoli, including Abu Sleem, refused to start taking classes when term began on Sunday.

There have long been rumblings of discontent among teachers throughout Libya, who besides protesting that they are underpaid, and all too often, not actually paid at all, have also been demanding health care insurance in line with other state employees.

The pay for a fully-qualified teacher rarely exceeds LD700. The Tripoli ministry of education has offered educators a monthly increase of LD5 for each class they take. This compares to a monthly hike of LD250 for headmasters.

Gauging effects of the strike is complicated by the continued use of many school buildings by internally displaced people.

Teachers think their case for more money is strengthened by the shortage of properly qualified candidates. This shortage is being exacerbated in Tripoli by the enforced gender segregation. It was realised that plans to split schools physically needed far more teachers than were available. The solution has been for girls to go to school in the morning and boys in the evening. [/restrict]