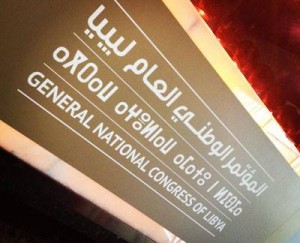 The General National Congress ended a mammoth all-day session . . .[restrict]this evening, refusing to submit any names for members of the presidential council until UNSMIL had accepted “substantial” amendments to the draft accord.

The leader of the GNC negotiating team Awad Abdul Saddeq was understood to be heading back immediately to the Moroccan resort of Skirhat where other members of the Dialogue have been awaiting the outcome of the GNC meeting.

By all accounts it was a stormy GNC session that began at 10 am and ran, with one break, for almost 12 hours. It is not yet clear how the debate ran. Journalists who went to the GNC building first thing were put in a room together and ignored for the rest of the day.

At one point there were reports that members had come up with nine names but could not agree a final list and were intending to reconvene tomorrow. If this was correct, the idea was scotched and the debate continued. [/restrict]

Leon loses patience with the GNC: going ahead without them