“What is difficult today may be impossible tomorrow”: Serraj 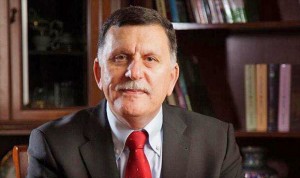 Premier-designate Faiez Al-Serraj has said that Libya is . . .[restrict]at a crucial crossroads.

“What is difficult today may become impossible tomorrow ” he warned in his first public statement since he accepted the role as prime minister and head of the presidential council in the new government of national accord.

This government , he insisted, would be one of reconciliation in both word and deed. But he said that it would only succeed in its task if it had the support of all Libyans.

“Libyans should be thinking about Libya and Libya only” he said, “This is time to build our future and stop the bloodshed. What is difficult today may become impossible tomorrow”.

Earlier today Serraj spoke by phone to the EU foreign minister Federica Mogherini, who welcomed his nomination.  She assured him of Europe’s full support in his work “in the coming days, weeks and months in leading Libya out of its current impasse toward peace and stability”.

She repeated that the EU stood ready with a substantial and immediate support package once the government of national accord had been formed. She added “ This package of support will of course be discussed with the Libyans so that it will meet their priorities and needs”.

She also said that she would stay in close contact with Serraj and looked forward to meeting him personally at the earliest opportunity. [/restrict]