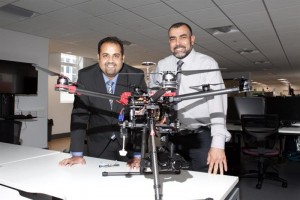 Libya’s Bubaker Shakmak has researched the study under the supervision of Prof. Amin Al-Habaibeh at NTU’s School of Architecture, Design and the Built Environment.

The university explained in a statement that the research, “aims to reduce the vast quantities of water which can be lost in large-scale pipes, particularly in arid countries where water is transported over large distances,” adding that it was recently presented at the Institute of Electrical and Electronics Engineers (IEEE) conference in Jordan.

“The early detection of leaks would enable water providers in arid countries like Libya to improve their operational efficiency, reduce the potential for the contamination of water and extend the life of facilities,” said Shakmak.

He added that using this technology would be a “cost-effective way of monitoring major pipelines” especially when avoiding the loss of consumable water is crucial. ??

The heat-detecting technology shows how high and low-resolution infrared cameras can be used on drones, flying from high altitude, to detect the change in temperature of sand when leaking water underground evaporates from the surface.

“Water is one of the most precious commodities around the world, but significant quantities are lost on a daily basis through leaking and broken pipes,” said Prof. Habaibeh of intelligent engineering systems at NTU, who is from Jordan. [/restrict]

Serb embassy may close as Dawn blames envoys for their kidnap