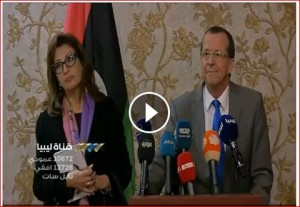 UN SGSR and UNSMIL head Martin Kobler was insulted at his press conference today by the Tripoli authorities and was forced to leave the capital hastily (Photo: Libya’s Channel).

SGSR and UNSMIL head Martin Kobler was humiliated by the Tripoli authorities today when his press conference was interrupted and told he needed permission to hold it at Tripoli’s Mitiga airport.

‘‘When you want to hold a press conference you have to take permission from the Foreign Media Department because we are responsible. By law, all the people (journalists/media) who are here, I must cancel their accreditation because this is the law’’, Zubia’s was recorded as saying by Libya’s Channel.

‘‘OK. We apologise and please do not cancel their accreditation. Thank you very much. Thank you’’, replied Kobler politely but somewhat bemused.

Kobler then promptly ended his press conference and left the hall at Mitiga airport heading straight to his waiting jet and flew out of Libya.

It is not clear exactly why Zubia decided to take such a course of action, but analysts felt that it was probably a reaction of frustration to Kobler’s decision not to hold a joint press conference with the GNC.

Also Kobler, in public at least, showed no flexibility and refused to concede any ground to the GNC on renegotiating the Libyan Political Agreement and its Government of National Accord. He left Tripoli with the GNC refusing to accept the Skhirat agreement.

There was also a reported invitation by GNC president Abu Sahmain to Kobler to visit Martyr Square this evening to witness the anti-Skhirat demonstrators. Unsurprisingly, Kobler failed to turn up at the set-piece spontaneous public demonstration.

Kobler had decided to go on to his various other meetings, including visiting the Tawergha camp off Al Falah road.

Libya Herald understands that the UN sought and obtained landing permission at Mitiga airport from the Tripoli-based Libyan Civil Aviation. Kobler was, therefore, ostensibly an official guest of the GNC and its president Abu Sahmain.

As the Tripoli authorities continue to scratch their heads as to what to do to resist the seemingly irresistible tide of the UN-brokered Skhirat agreement, they would do well to recall that Kobler is the Special Representative of the Secretary General of the UN.

Kobler arrives in Tripoli with the power, authority and weight of the UN, the international community and UNSC Resolution 2259 behind him.

Article 18 of UNSC Resolution 2259 specifically says that it ‘’Calls upon all parties to cooperate fully with the activities of UNSMIL, including allowing it free interaction with all interlocutors and to take necessary steps to ensure the security of as well as the unhindered movement and timely access for the UN and associated personnel’’.

Therefore, by virtue of international law, Kobler has the right to arrive in Tripoli and as plans shortly, to open up a permanent UNSMIL office in the capital. This seems even closer with the revelation by Kobler in his tweet today that he ‘‘welcomed H.E. Abu Sahmain’s promise to facilitate UNSMIL redeployment to Tripoli. We need to be back in Libya, among and with Libyan people’’.

All this seems to be frustrating the hardliners. There is emerging a sense of desperation by the GNC-Libya Dawn coalition which seems to be unravelling and spiraling out of control in the 30-day countdown to the formation of the GNA.

There was news that Zubia had subsequently been arrested by Mitiga Airport Protection Unit or by Abdel Rauf Kara’s Rada (Special Deterrent Force). However, there are reports that he has been since released. [/restrict]