Tripoli bank with no notes gives pensioners sacks of coins

Cash has become a heavy burden for some bank customers (photo: social media) 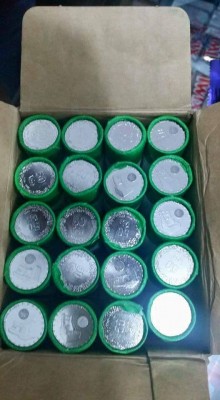 A Tripoli bank has run out a banknotes and for the last two days has been paying out customers with up to LD200 in small coins.

Pensioners have been struggling from the Dahra branch of Jumhouria Bank with sacks or boxes of low-value coinage. The 50, 100, 250 and 500 dirham (half dinar) coins are still inside the tubes in which they were issued by the Central Bank.

Jumhouria has given no explanation for the lack of banknotes. Nor could anyone be contacted today at the Central Bank to respond to speculation that it was itself running short of printed currency to distribute to retail banks. However, it appears that other banks in the capital have not been experiencing the same problem.

For the last two years there have been periodic shortages of paper dinars. In 2014 part of the problem was a spate armed robberies on trucks delivering cash to bank branches.

Then last November Jumhouria Bank announced it was starting internet banking, in an attempt to ease cash shortages. However an executive at another bank pointed out at the time that only a relatively few, largely younger Libyans used the internet for any transactions. He doubted that domestic internet banking products would see a rapid take-up. [/restrict]

Another warplane crashes in Bengahzi