By Sami Zaptia and Saber Ayyub

Inflation is hitting Libyan families hard as they struggle with rising consumer . . .[restrict]prices caused by the combination of the deficit, the lack of availability of hard currency from the Central Bank of Libya as well as the rise in the black market exchange rate.

Libya Herald conducted a survey of the prices of around 60 items of stock vegetables and foodstuffs in central Tripoli vegetable and food stores and interviewed a number of residents.

Abdullah, a driver said: ‘‘My income is limited and I have six kids I have to feed. I used to go to Kremia wholesale (vegetable and food) market in Tripoli to find the best rates for my basic food every month. However, prices there now are high as well. The box of tomato paste (Bustan brand) contains 12 cans was LD 12.5 and has now increased to LD 17. And a Libyan a box of pasta (Maida contains 20 boxes (half kilo each) was LD 16 and has now reached to LD 24’’.

‘‘As for bread, I used to purchase for daily consumption for the family 40 small paninis far a 1 Dinar. Know I decreased the number to 30 pieces for 3 Dinars every day’’.

Osama, an HR manager commented: ‘‘I think things will get worse with the dry up of cash in banks and the mad rise of the prices. I would keep as much cash of my money at home and I need to rationalize expenses as much as I can’’.

Naji, a businessman said: ‘‘Before, when I used to go shopping at any shop, I used to fill my basket with my needs, then I would head quickly to the cashier to pay and leave without focusing much on prices. Now, things have changed. What used to cost me 50 Dinars, now costs me over 100 Dinars for the same goods and quantity.  Subsequently, I started to focus on prices of goods before filling them in my basket. It is terrible’’.

Libya has also experienced a spiraling in state sector salaries and subsidies. State-sector salaries have surged from LD 8 bn prior to the 2011 revolution to LD 21 bn in its 2015 budget. 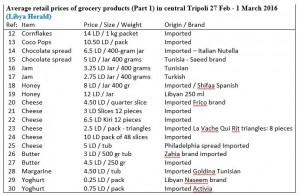 Psychologically, uncertainty caused by insecurity as a result of the political split in the country, the plethora of militias and wide availability of medium and heavy weapons has also added to market fears. 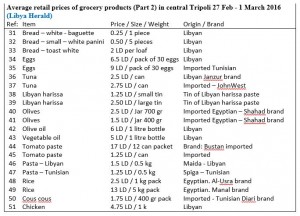 Imported brands such as cereals, chocolate pastes, milk, jam, tea, coffee, cheeses, fruit juices, tuna, and harissa, are daily staples for school kids’ breakfasts and school snacks and have all shot up in price.

There is some local production of vegetables and fruit, but their prices have increased too. An importer of agriculture seeds, fertilizers and pesticide explained to Libya Herald that all these are imported from abroad and with the bureaucracy of opening Letters of Credit and obtaining hard currency via official sources, many are purchased using the black market exchange rate, which is nearly three times the official rate. (1 US$ to 1.33 LD as opposed to 3.30 LD) 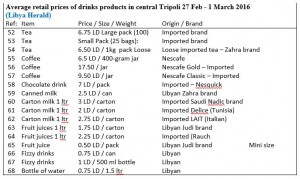 Also most Libyan farm owners use sub-Saharan African or Egyptian workers, most of whom have fled back home due to Libya’s lack of security and fighting. Labour costs have risen due to the rise in the cost of living and due to the scarcity in supply of workers. Many Libyan farms are lying unproductive due to the lack of farm labourers, he explained.

The import of fruit and vegetables from Tunisia, Egypt and beyond have been greatly affected by insecurity the on-off closures of the Tripoli – Tunisia highway around Zawia, Sabratha and the Wirshafana coastal area.

Equally, the flow of goods to and from the east, Cyrenaica and Egypt have been affected by the troubles in Sirte and the central region. This has, for example affected the great quantities of tomatoes and other products that used to be trucked from the Jalu and Aujla region to western Libya. Great quantities of garlic, melons, watermelons used to be trucked from the south too to Tripoli’s main wholesale food Kremia market, the agricultural goods importer explained.

The survey represents a snap picture of average prices of products surveyed between 27 February to 2 March 2016 at central Tripoli retailers by Libya Herald reporter and a mystery researcher/photographer. Prices seem to vary from day to day and week to week more than usual especially for imported items. Product quality of vegetables/fruit varied from shop to shop and area to area. Prices can be cheaper at wholesale / outlying areas.

Origin of items: it was not possible to always be certain about the origin of goods. For example, tomatoes, garlic, onions and oranges can be sometimes mixed. We listed items as we were informed by the vendor.

All prices are in LD Libyan Dinar [/restrict]