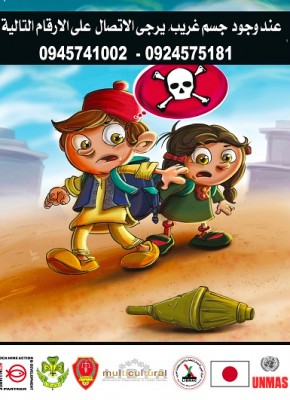 The danger particularly to children of . . .[restrict]unexploded shells and land mines in Benghazi is being driven home in a colourful campaign launched by UNSMIL.

Poster graphics warn families anxious to return to their homes in the city from which the fighting has moved on, to beware because the areas remain dangerous thanks to unexploded ordinance.

The message spelt with cartoons out is not to approach nor touch any suspicious object but to report it immediately.

Army engineers have cleared away some explosives. However bomb-disposal experts are few and far between and are still needed to deal with the booby traps that retreating terrorists regularly leave behind.