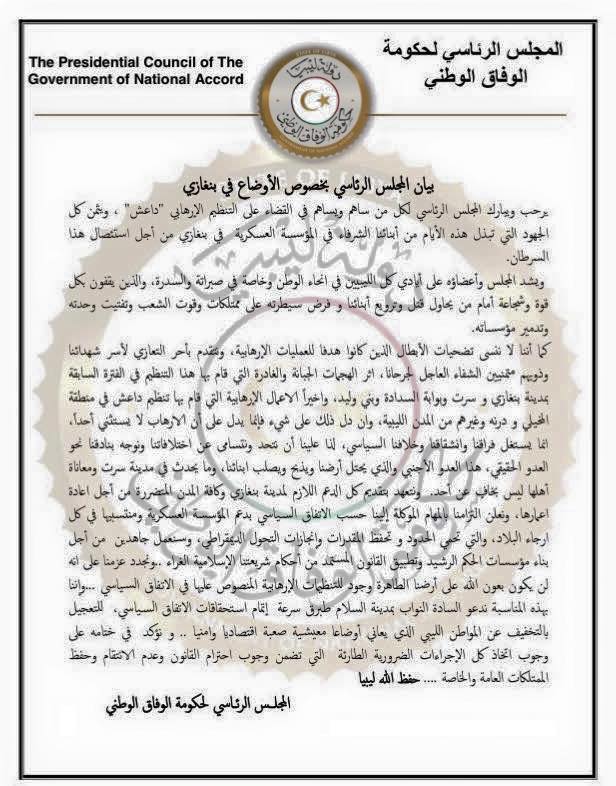 The Presidency Council has congratulated the . . .[restrict]Libyan National Army for eliminating the so-called Islamic State (IS) and allied militants in Benghazi. In a statement today, Wednesday, those fighting IS throughout the country were commended, but there was special mention of the military forces in Benghazi fighting against IS.

In the statement, the Presidency Council said that there had to be united efforts to fight IS across the country. It mentioned in particular Sabrath and the Sidra area. Presenting its condolences to the families of those murdered by IS in Benghazi, Sirte and Derna and elsewhere, the council praised those who had understood the threat and decided to stand up to IS. It encouraged others to do so, while at the same time urging the House of Representatives (HoR) to meet and approve the national unity government.

The statement pledged that the government would rebuild Benghazi and other places that suffered in the fight against the extremists. The military, too, would be supported in line with the Libyan Political Agreement, and the borders would be secured.

Commenting on the statement afterwards, Presidency Council member Fathi Majberi reiterated the pledge to rebuild the army, and again praised its fight against IS in Benghazi.

The Presidency Council has been relying on Majbri, who is from Cyrenaica, to reach out to the east and build support for it there. In the past few days he has had meetings with representatives of a number of eastern tribes as well as with HoR president Ageela Saleh and other members of the parliament. [/restrict]

Algerian minister has talks with Serraj in Tripoli