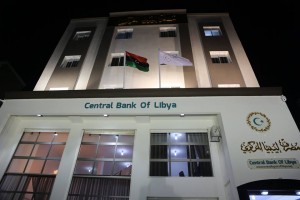 The . . .[restrict]Beida-based Central Bank of Libya (CBL) claimed in a statement released Thursday that it has ordered a new print of Libyan banknotes in order to solve the cash crises at banks.

The CBL did not say which country or which printers will be supplying the new print of money but said that the new money print should be arriving in June this year. It hoped that it could bring forward deliveries to an earlier date.

However, the claim by CBL Beida seems to be no more than an echo of a five-point statement made yesterday by the PC/GNA and the Tripoli-based CBL.

The fifth point of that statement said that it was agreed to hasten the import of the consignment of Libyan money notes to be imported from Britain to start arriving in batches from next week instead of arriving as had previously been planned in June. [/restrict]