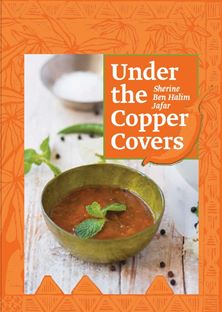 With appearances on MBC; an interview with . . .[restrict]The National Newspaper (UAE daily Newspaper), and a raving review from a Libyan-British Blogger, you think this lady would be getting arrogant. Instead on a quite Sunday afternoon via Skype, I met a humble, fun, and generous lady full of life.

Her father the prominent and respected Mustapha Ben Halim, was the Libyan Prime Minister who found himself and his family forever exiled and rejected by a regime, that vilified him, and tried to destroy his reputation and life.

The book really is two books, the first half is the story of her family, and their painful exodus from Libya in 1969, when the Qaddafi Revolution, removed the Libyan Monarchy of King Idris.

Sherine Ben Halim Jafar is a warm, likeable and charismatic Libyan lady who loves to cook for her family and friends. Her new cookbook “Under The Copper Covers” has been creating a big buzz of excitement on the Facebook walls of Libyans and Arabs in the Diaspora, and in Arab Countries.

The biography section is heart-warming for it shows the power of family, love, faith, and the human capacity to endure difficult times. As I read her family’s story, in one sitting, after happily tearing open my Amazon delivery, after waiting impatiently for a week. Little did I know I would do no work that evening, until I finished the book, close to midnight.

As I was reading the book, I found myself crying, laughing, and smiling. It’s a powerful story told with a sincere and honest heart, and because of that you connect with the book, and find yourself remembering Libya’s past, and wondering and praying for Libya’s future.

The second half of the book, is her joy and happiness that she found through cooking food, which helped her through these difficult times, and learning dishes as a child from her mother, and later family and friends.

Her journey of food is a reflection of her life, food from Libya (her father, her aunts and her Tripoli childhood), Palestine (her mother), and later through the places she grew up in (London, Lebanon), and the friends (Iran) and family (Iraq and Lebanon, her husband and In-Laws, and Syria from her maternal grandmother) that enriched her life.

There is also touches of the Gulf countries through the Emirates, and Saudi Arabia, a country that gave them nationality and a home after the Qaddafi Revolution of 1969. It’s a modern portrayal of the global Arab diaspora in 2016. It’s through the food of their family, that people maintain their connections to home, but also make new connections and new homes.

Her favourite comforting dish is English apple pie, a dish learnt in her London childhood. Although her mom was her greatest influence, she was also influenced by British TV cooks, the biggest influence and she calls her ‘mentor’ is Delia Smith, the Martha Stewart of Britain.

Asked about a choice between a home cooked meal or going out to a restaurant, she states a good home cooked meal was the best experience, since you spend quality time with your guest, for home cooked food was soul food from the heart.

As for her favourite Libyan dish, she stated proper Couscousy (cous cous ) with lamb and potatoes, pumpkin and chick peas. Asked about her favourite Libyan hangout as a child, and when she visited after 2011, she said with great fondness the beach near Tripoli, and the beach near Benghazi in 2014. Our beaches are amazing, I agreed with her, as we remembered fondly sunnier and lazier days.

I look forward to trying her Libyan soup recipe this coming Ramadan, since I am like many Libyans abroad who are sick of half-baked recipes online, and elsewhere. Her couscousy recipe, will be compared to my mom’s, and I am hoping the Kaak Helou recipe will erase my last Kaak disaster in the kitchen.

It’s the Knafeh Nabulsiyeh and Katayef that has gotten me even more excited, since the recipe was very simple and straightforward in her book. For I always relied on my secret Syrian sweet shop on Edgeware Road [London] for my Knafeh and Katayef addiction for the last two or three years for Ramadan.

As I interviewed the lovely Mrs Sherine, I found her enthusiasm infectious, and it made me feel proud. In this time of great difficulty for Libya, there was someone lighting a candle, in our moment of darkness, and making us proud, ”bint bladna” (our home). She is making us proud with her hard work and achievement. We are proud of you Mrs Sherine. Mashallah.