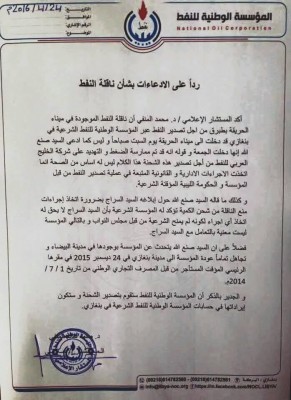 The Thinni government in Beida has lashed . . .[restrict]out at what it called “illegal institutions in Tripoli” using threats and intimidation to prevent it selling oil.

The condemnation, from the Thinni government’s official spokesman Hatem Oraibi, follows successful moves by employees of the Arabain Gulf Oil Company (AGOCO) yesterday preventing attempts of export over half a million barrels of oil by the Beida government from Tobruk’s Hariga terminal.

The head of National Oil Corporation (NOC) in Tripoli, Mustafa Sanallah, who is now working with the UN-backed Presidency Council, was informed of the move by AGOCO and in turn notified the Presidency Council led by prime-minister designate Faiez Serraj.

“I notified Prime Minister Serraj and the Presidency Council, who understood immediately the seriousness of the issue and took the necessary steps to stop the vessel from loading,” Sanallah said in a statement on the NOC website, describing the Thinni government’s move as “an attempt by the parallel administration in Beida to export oil illicitly”.

“Agoco employees and port officials understood this was a political attempt to divide the country, and I am very proud that they resisted the pressure to load this vessel,” said Sonallah. “This had the potential to be a very ugly incident and I am pleased that it has been resolved peacefully without injury to anybody or loss of revenue or damage to the integrity of NOC or the country.”

The international marketing manager of the parallel NOC administration in Beida had told AGOCO to load 650,000 barrels of oil on 21 April at Hariga for DSA Consultancy FZC, a company registered in Sharjah, Sanallah said. He named the tanker as the Indian-flagged Distya Ameya, saying it had arrived at Hariga just afer midnight on 22 April but was not cleared to load.

“We have been in communication with the master of the ship,” Sanallah added. “We have informed him he is breaching UN resolutions and we have asked him to leave Libyan waters immediately. He has turned off his vessel’s tracking system.”

Marine tracking systems last show the vessel on 21 April off the north coast of Egypt, near Marsa Matruh, heading towards Libya. Its official destination was supposed to be Limassol in Cyprus.

“There is only one National Oil Corporation. DSA Consultancy has no relationship with it, and has no legal contract to buy Libyan oil,” he added. “The crude oil DSA intended to load was already committed to other buyers. I hope this has been an expensive lesson to them and others,” he stated.

For its part, the rival body in Beida today claimed that it was the sole legitimate oil corporation because it was set by the Thinni govnerment which was the only legal government. [/restrict]