A sample of one of the "Russian" dinars (Photo: Beida CBL).

The Beida-based Central Bank of Libya (CBL) today revealed samples of the new banknotes it has . . .[restrict]ordered from Russia.

It announced that the notes will go into circulation from Wednesday 1st June.

The new print of LD 4 billion are of LD 50 and LD 20 denominations and was contracted for on 15 February this year. They will be circulated across all Libyan cities, the statement said. 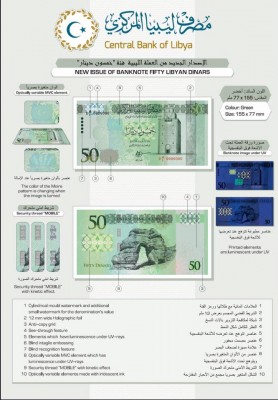 Speaking to Libyan Al-Iktisadia TV, eastern CBL Governor Ali Hibri said that the new banknotes have exactly the same specifications as the existing currency in circulation and therefore there will be no conflict with existing ones.

There were fears that there would be two different currencies in circulation across Libya heralding an official split of the politically divided country, and that the two issues might acquire two different valuations in the market.

The statement also confirmed that a sample of the new banknotes had been presented at the joint meeting of the two CBLs and Presidential Council meeting in Tunis in May. [/restrict]