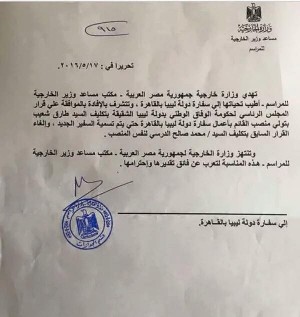 Bringing an end to the long saga . . .[restrict]over who is in charge of Libya’s embassy in Cairo, the Egyptian foreign ministry has finally approved the accreditation of Tariq Shouib as chargé d’affaires.

He was originally appointed by interim prime minister Abdullah Al-Thinni late last year after Mohamed Saleh Al-Dressi who had taken over from the previous ambassador was sacked amid allegations of corruption. However, he refused to go and continued to insist he was in charge, even though at the time the Egyptian said that they would recognise Shouib.

Egypt air to start Cairo flights to Benghazi on 18 April

He has now switched to the Presidency Council which has reconfirmed him in the post. In a letter dated 17 May, the Egyptian foreign ministry said that it accepted his nomination by Serraj pending the appointment of the new ambassador. [/restrict]

No cooperation with Serraj administration until militias disbanded says Hafter