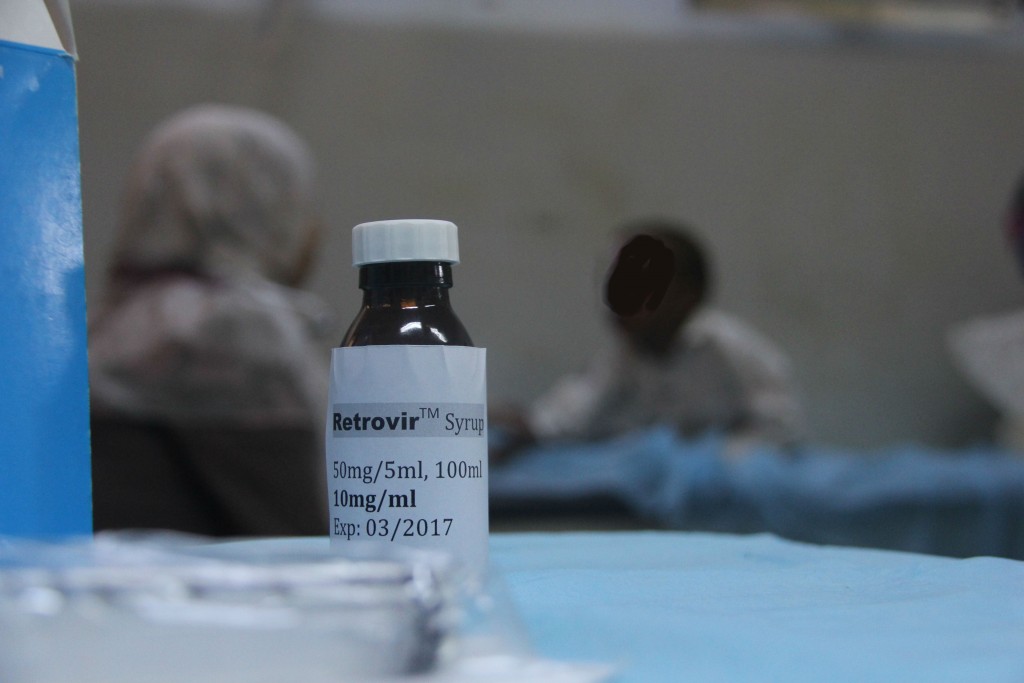 For most Libyans, AIDS and HIV are something that . . .[restrict]happens elsewhere. They do not want to acknowledge their existence in Libya or even talk about them. There is a string social stigma connected to the disease. But in reality there are thousands of Libyans infected with it. With the right medication people can now live with HIV, but in the current anarchic circumstances where hospitals and clinics across the country have seen their supplies of drugs and medications run out and not be replaced, HIV patients are at great risk.

Dr Elham Elhshik, who works at Tripoli Medical Centre with children infected with the virus, writes of the very dangerous consequences for them as a result from the present political chaos.

At the end of my workday on the paediatrics HIV ward, I flipped through the lab results of the viral load levels of my patients. The numbers in the reports had skyrocketed, my heart ached and my mind wandered. I put the reports away, as if that would make them improve or vanish.

The numbers in the reports of HIV viral load reflect the amount of control we have on the disease. If a child infected with HIV takes his HIV medications regularly, the numbers will be low or even undetectable, the disease will be under control and the child will live a normal, healthy life. When the numbers start to rise, it is the first sign predicting a clinical decline. A drop in immunity will follow; the child’s immune system will collapse and the full ugly manifestation of AIDS will prevail.

This loss of control of the disease course that our patients are suffering is not a consequence of the normal progression of the disease, but because of the interrupted supply of HIV medications. We have more than a hundred children infected with HIV in our care and thousands of adults. The children have mainly acquired the infection from their parents. In some cases, the mother did not know she had HIV while she was pregnant, or she was unaware of the steps she should take to prevent the transmission of the disease to her baby, or she had no access to the medical care that she needed to receive.

In 2010, a programme to prevent mother-to-child transmission of HIV was established at the Paediatric Infectious Diseases Department of Tripoli Medical Centre. The programme was successful in preventing the transmission of the virus in more than 90 percent of the babies whose mothers were HIV-positive. The programme covered all the western and southern parts of Libya. The percentage of success rose every year. Even when there was a shortage of the required syrup used in the prevention, we crushed and ground the solid tablet form of the HIV medicine and diluted it with liquid to administer to the babies. This was achieved by a collaborative team effort of the pharmacists, obstetricians, physicians in the adult departments and the paediatricians. Pregnant women and children were the priority when dispensing HIV medicines, particularly when we faced a shortage in supply.

There are two encouraging times in the care of people with HIV. The first one is the tremendous success of prophylactic medication in preventing the transmission of the disease to the newborn. The moment you deliver the news to an HIV-infected mother that her baby is not infected, there are tears of joy in her eyes and a glimmer of hope shining from her face. The second is watching the “Lazarus” effect of the HIV medicines on infected children. They are literally pulled away from the clenched jaw of death. The medicine restores health, saves the collapsing immune system, raises hope and changes the life of the family as a whole. The problem with this “Lazarus” effect is when you watch it go backward. When the medicine supply is interrupted, as it is now, the caring physician or paediatrician will watch the patient’s health rapidly slip through his fingers without being able to do anything to stop the progression of the disease.

Recently the care for HIV patients in Libya has fallen apart because the demand has far exceeded the interrupted supply of HIV medications available. HIV medicines are supplied through the government via the Centre for Disease Control of Libya. It is nearly impossible for a patient to buy the necessary medications at his own expense. Each patient usually needs three to four different HIV medicines.  One of the medicines can cost $1200 per month. Usually more than one member in the family needs these medications – and they do not need a short course for a few months. They will need it for a lifetime! No matter what the financial situation of the family is, it will be impossible for them to cover the cost of the medicines by themselves.

Another important fact regarding HIV in our society is that unlike other illnesses and diseases, people don’t sympathise with the sufferer. Stigma and discrimination are enormous, even among doctors and the most educated classes of society. For this reason, it is very difficult to raise charity money to help these patients. The families suffer alone, isolated, in darkness.

Nevertheless, we have tried to contact many international organisations to secure a supply of HIV medicines, even for a short period.

But what we have obtained is limited and insufficient. People may be willing to help, but I’m afraid we are confronting the “Bystander effect” when everyone thinks someone else will help, but the victim ends up alone, abandoned, stranded and helpless.

The bitter truth is that the losers in this crisis are not only the innocent children or their parents. The crisis will have a global impact, with the emergence of new strains of HIV that will have resistance to most of the medications we currently use for treatment.