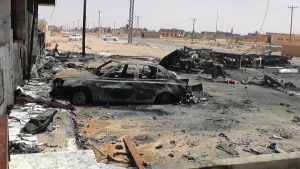 A suicide bomber, presumed to belong to the so-called Islamic State (IS), killed ten members of the security forces today when he managed to blow himself up in front of the police station at Abu Grain, some 120 kilometres south of Misrata. According to Misrata Central Hospital, to which the bodies were taken, it is also treating seven others who were wounded in the attack.

Of the ten killed, four are said to be from Misrata, four from Sirte and two from Abu Grain itself.

There are reports that now put the number of deaths at 11 but these have not been confirmed and are denied by sources in Misrata.

It is unclear how the suicide bomber managed to get through to Abu Grain. Forces under the Bunyan Marsous operation room have been on the lookout for such attackers, knowing that they are IS’ main weapon of attack.

There has been little movement either way in Sirte in the past 24 hours. IS was reported to have tried a counter offensive early yesterday, but to no effect. The Bunyan Marsous operations room later said that it had not lost any territory during the day.

It has made no comment about reports that five of its members were seized by IS forces yesterday.

There have been claims, however, that its statements have been exaggerated. Questions have certainly been asked about the extent of its control over Sirte port, with suggestions that IS still holds the port’s administrative buildings. Responding to these, the operations room today published a video of its people near the port, although it was taken from some distance. 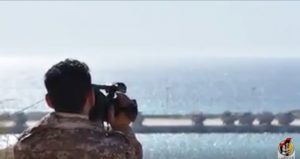