How IS is surrounded in Sirte 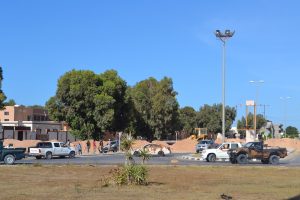 The Zaafran roundabout where IS used to crucify so-called “misbelievers”, in reality anyone who opposed them (Photo: Libya Herald)

Salem Taleb focuses on the Ouagadougou Centre with his binoculars. The Islamic State HQ in Sirte is three kilometres away but IS fighters are closer, about 1.5 kilometres, hiding in three buildings ahead of the checkpoint held by the Third Military Forces. It is a Misrati brigade and Salem Taleb belongs to it.

“They have rockets, snipers and they use suicide cars. They currently attack at night because it’s a full moon,” Taleb told Libya Herald.

The checkpoint is south of Sirte, on the main road to Benghazi. Every 12 hours, a new team of a dozen men with machine guns change shift to control the area. The mission is very clear and simple: don’t move ahead and make sure no IS fighters escape.

“IS is trapped in a 25-square-kilometre area in Sirte. They can’t leave. We’ve decided to lay siege to them until they run out of ammunition,” a commander in the Bunyan Marsous operations room, said.

The IS zone is downtown between coastal districts nos. 1, 2 and 3 in the north to Ouagadougou centre in the south. Mohamed (he doesn’t want to give his real name) is in charge of intelligence. He updates a Google Earth map with IS fighters’ positions in the buildings in the city center with blue pins. “This strategy will cost less lives and less destruction than launching a massive offensive with airstrikes”, he explains.

Ibrahim Beitalmal, head of Misrata military council, estimates that around 500 IS fighters are left in Sirte out of the 2,500 there previously. Other militaries sources say between 800 and 1,000 have been killed, while the others managed to flee before the Bunyan Marsous forces surrounded the town. East of Sirte, in Harawa and Nuflyia, the military operation launched by Faiez Serraj’s internationally-recognised government, has drawn in the Petroleum Facilities Guards (PFG) led by Ibrahim Jedhran and Colonel Bashir Budafira from the Ajdabiya-Sirte operations room. Offshore, the sea access is protected by coast guards from the central sector.

“We have two tugboats with machine guns on them, a 16-metre boat with light weapons and two Zodiac boats to protect the port. We have no help from other Libyan cities, not even from Tripoli”, Reda Essa, the local commander of the coast guards, says.

The plan is to destroy the Islamic State in Sirte within a month. So far the offensive, which started on 12 May, has killed about more than 200 of its fighters and wounded more than 500. “The Bunyan Marsous operation gathers brigades from western Libya towns and cities such as Misrata Tripoli, Janzour, Nalut, Zliten, Tajoura, the Wershefana area, and more,” Colonel Mohamed Ghasri, spokesman for the operations room says. “Anyone can join us.”

He adds that even Khalifa Haftar is welcome if he recognises Faiez Serraj’s Government of National Accord (GNA). It may be a joke. Several other leading military figures like Ibrahim Baitalmal and Reda Essa told this newspaper that they would never accept Haftar among them. 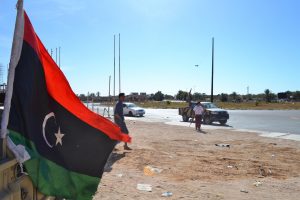 Officially, a report is sent daily to the Presidency Council about the military situation in Sirte. But on the front, the brigade are more or less free to do what they want but they feel abandoned.

“It’s me who decides who can leave the frontline for a while. I don’t have to refer to anyone regarding my brigade”, Rami Ragou, the chief of a brigade from Nalut, says. His men are in charge to protect the Zaafran roundabout, which is the west entrance of Sirte and well known as the place IS used to crucify “misbelievers”.

Rami Ragou complains that his group will run out of ammunition soon. “I haven’t received anything. We’ll have to go back to Nalut for ammunition.” All of his men and most of the fighters this newspaper had seen were without any basic military equipment such as helmets or bullet-proof jackets. 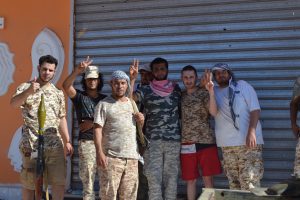 But the Bunyan Marsous operations room is allegedly receiving help from 15 to 20 advisers from British and American special forces. “They help us to locate the IS fighters”, Mohamed Ghasri said.