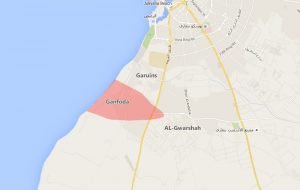 Besieged militants in Benghazi have rejected an offer of safe passage for their wives and children because the army insisted all those leaving would be searched.

The offer was made to insurgents, including IS and Ansar Al-Sharia terrorists, cut off in the Ganfouda resort to the south west of the city. It is unclear how many relatives are trapped. The army said that it would have to search everyone to ensure that no one could escape disguised as women.

The safe-passage offer came during a day of heavy fighting in which at least ten soldiers died and forty were injured.

Troops have taken control of the buildings known as the Chinese Offices in Garyounis and army sources say good progress is also being made in clearing Gwarsha.  There have been airstrikes and shelling on enemy positions in the course of the day. Late this evening the sound of heavy gunfire could be heard coming from Ganfouda.

The other two militant strongholds in Sabri and Suq Al-Hout near the port continue to hold out.  Yesterday a car bomb exploded in the administration car park at Benghazi Medical Centre but caused no injuries.