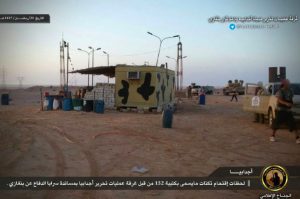 A building apparently occupied by the BDV

The Petroleum Facilities Guard has vowed to fight a new Benghazi militant unit which it accused of being part of IS.

PFG spokesman Ali Hassi said that the battle to defend Ajdabiya from the Benghazi Defence Brigades was beginning. He said that his force was fighting in the name of the Government of National Accord and was reporting to its ministry of defence. He gave no details of any engagements wth the BDB.

Meanwhile, the BDB’s “media office” has been posting pictures apparently showing its members occupying buildings in Ajdabiya.  Besides a short video of its leader, named as Al-Saadi Al-Nawfali, there are shots of buildings, including one with a radio mast and another with fuel storage tanks, which the BDB claims to be holding. All the locations look to be away from built-up areas. The faces of some of the fighters have been blanked out.

The BDB emerged earlier this month and claimed to be fighting under the authority of Sheikh Sadiq Ghariani and his Dar Al-Iftah in Tripoli. They seized part of Ajdabiya but were reportedly thrown out of the town by the Libyan army.

They had earlier announced that they were heading to Benghazi and warned communities in their path not to resist them, or they would be destroyed.