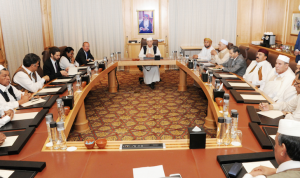 UN Special Envoy Martin Kobler met House of Representatives (HoR) President Ageela Saleh in the Omani capital Muscat today for yet further talks as to when the parliament might meet and vote on the Government of National Accord and the Libyan Political Agreement.

Kobler later tweeted that there has been a “constructive, franc (sic) & open dialogue” with the HoR president. Both, he said, had agreed on the urgent need of political and military progress – presumably against the so-called Islamic State (IS). There was, however, no sign of any breakthrough in the current political stalemate.

As well as meeting Ageela Salah privately, Kobler also attended a session with a number of members of the HoR who accompanied the president to Muscat.

Oman, which is attempting to act a fresh mediator in the Libyan crisis, invited Ageela Saleh and the HoR delegation to come and discuss the various issues stalling any movement towards a settlement.

Kobler and Ageela Saleh have had several meetings that, in the end, were fruitless. They met at the beginning of December in Shahat when the talks were similarly described by Kobler as “very tough”, at the end of the same month in neighbouring Beida, again in Shahat in January, in February in Munich, and in April in Tobruk.