Just under 30,000 POS cards issued by Libyan banks January to May 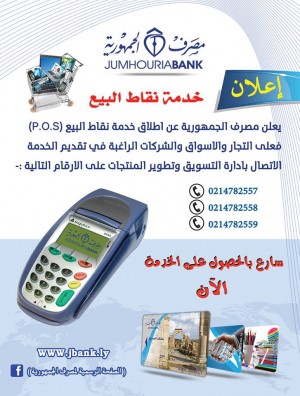 The Audit Bureau reports that five Libyan banks had issued just under 30,000 POS cards up to May 2016 (Photo: Jumhouria bank).

In the five months of this year these card holders had made purchases totalling just under five million dinars at an average of LD 166 per card issued.

The number of POS cards issued by local banks is quite small, with Jumhouria banks, Libya’s largest bank, issuing over 18,000 cards. Sahary bank, however, was listed by the Audit Bureau as having issued only two POS cards.

It is unclear how accurate or representative the figures given by the Audit Bureau are, but they reflect very low usage of POS cards in Libya. They also reflect how underdeveloped Libya’s retail banking sector is.

This is especially so in view of the fact that there are just over one million Libyan state-sector employees out of a population of 6.5 million who all get paid through their bank accounts.

It must also be kept in mind that very few retailers actually use the POS system, which limits the number of retail outlets available for POS cards holders to use. The Audit Bureau failed to report on how many outlets do operate POS systems.

However, it is also worth underlining to what extent Libya is still a cash-based society. It is only the cash shortage that has precipitated after the 2011 revolution, peaking in 2016, that banks have resorted to issuing POS, debit and ATM cards.

The Audit Bureau was highlighting the use of POS cards as part of a joint concerted drive by it and the Central Bank of Libya to mitigate the cash shortage crises. The CBL has also printed new money.

The cash shortage crisis is caused by a combination of decreased state revenues caused by decreased oil revenues and political instability. The loss of confidence by Libyans in the political and hence the economic situation in the country has led to people hoarding their cash at home rather than depositing it in their bank accounts.