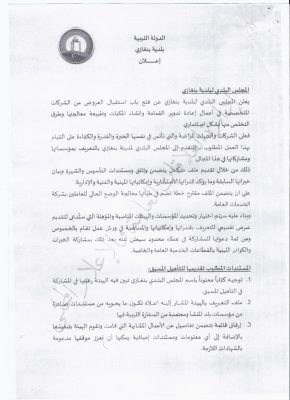 In an unexpected response to Benghazi’s mountains of garbage, the municipal council has called on companies involved in recycling to make proposals and offers.

In a country where consumption has long been conspicuous, where there has been little public or official concern about the state of the environment, and where urban rubbish regularly piles up in mounds, this is a major new development, not just for Benghazi but for the whole country.

It is not just recycling of fresh waste that the council wants dealing with, but the existing garbage dumps dumps as well.

The task is mammoth.  Ever since the revolution, garbage disposal has been a major issue in the city.  There have been regular strikes by street cleaners and garbage disposal teams because of repeated and long delays in salary payments sometimes workers have not been paid for five or six months, These are thought to have acted as a spur to the council’s sudden environmental awareness.

For the past two years, too, as the city has effectively gone through a civil war, several areas have been reduced to rubble and are now themselves little more than large garbage dumps.

The council is clearly aware that dealing with this once the city is stabilised and comely free of terrorists and militants, is going to be one of it prime tasks.