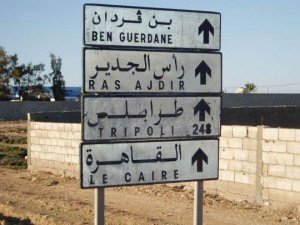 The Ras Jedir border crossing between Libya and Tunisia was shut for several hours on Friday from the Libyan side after a dispute that began a couple of days ago when a Libyan border guard chased a Tunisian trader across the frontier and then started shooting while on Tunisian territory. Libyan reports say the trader was shot but an official in the Tunisian border town of Ben Guerdane has denied this, saying that the Tunisian National Guard intervened and forced the Libyan back across the border.

According to some Libyan officials, four Libyan customs officers were then seized yesterday on Libyan soil by masked Tunisian traders/smugglers. Although they were later released, this allegedly then led to 12 Tunisian traders being seized near the border and taken to Zuwara, where they are supposedly still being held.

The Ben Guerdane official, however, denies this version of events, saying that the four Libyan customs officers were arrested on corruption charges by a Libyan brigade which he named “Al Muqannaoon” (the hooded/masked men).

Hafedh Maamer, the media spokesman for the Libyan border guards, has similarly said on his Facebook page that the reports of the Libyans and 12 Tunisians being seized were “just rumours”.

He insisted that the measures taken by the Libyan border crossing officials were “purely technical” and the aim was “respect for the law by both sides”.

All agree, though, that Tunisian protestors then yesterday closed the road from Ben Guerdane to Ras Jedir amid continuing anger at restrictions imposed by Libyan authorities to stop a flood of goods from Libya flowing into Tunisia.

For a long time, fuel and subsidised good were the stock-in-trade of the smugglers, but with the collapse of the Libyan dinar – it is now down to a little over half a Tunisia dinar – almost everything sold in Libya is worth smuggling to Tunisia.

In Tunisia, a set of tyres, for example, costs around 1,600 Tunisian dinars. The same four in Libya are 1,000 Libyan dinars, currently equivalent to around 550 Tunisian dinars ­– a third of the Tunisian price.

In the Ben Guerdane area, where the lack of jobs has forced many locals into smuggling, the continuing tightening of cross border trade by the Libyan authorities is bitterly resented and has created an atmosphere of resentment towards Libya and Libyans. The result has been a rise in mutual animosity, with the Tunisians complaining of bad treatment by the Libyan border guards and Libyans complaining of being attacked as they drive through Ben Guerdane.