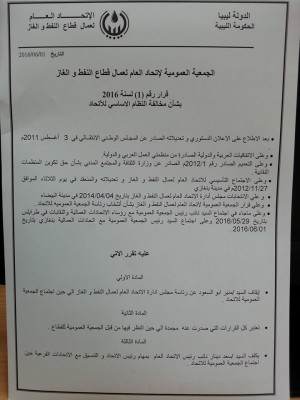 The head of the General Union of Oil . . .[restrict]and Gas workers, Munir Abu Saud, has been suspended by the union amid allegations of corruption. He has been temporarily replaced by the union’s deputy present, Saad Dinar, pending a general assembly of the union.

In a statement by the union from its Benghazi offices, it said that the decision had been taken following talks between union leaders and members in Tripoli on 29 May and then at a formal meeting in Benghazi on 1 June.

It also said that all decisions taken by Abu Saud would be frozen until the general assembly decided his position and how to move forward.

Abu Saud is believed to be staying in Tripoli at present. [/restrict]

Serraj predicts defeat of IS, says all are welcome in Libyan army