IOM’s report on displaced, returnees and migrants in Libya

The IOM’s latest (Round 4) Displacement Tracking Matrix (DTM) report on Libya’s internally displaced persons (IDPs), returnees and migrants says that there were a total of 425,250 IDPs, 258, 025 returnees and 264,014 migrants identified in Libya.

The DTM is a system enabling the development and maintenance of baseline of information on displaced populations. DTM provides evidence for targeted assistance and better understanding of the push and pull factors related to displacement and/or migration. DTM Libya concentrates efforts on tracking IDPs, returnees and migrants through the publication of monthly reports, alert snapshots maps and raw data, the report says.

The DTM recorded 425,250 individuals (84,750 households), as internally displaced, representing a slight increase from the 417,123 individuals identified in Round 3. The top four areas of origin, Benghazi, Sirte, Tawergha, and Derna, account for 80 percent of the IDPs in Libya. The largest proportion of IDPs are from Benghazi (44.5%). However, there is a large and growing number of IDPs originating from Sirte (19.2%), an increase from the 13.2% noted in round 3.

Benghazi has produced the largest number of IDPs, with 189,413 individuals (45% of all IDPs in the country) having been identified as displaced from there alone. However, with conflict having de- escalated in many parts of Benghazi, increasing returns have been recorded to the area since March.

Sirte is currently the second largest IDP producing area in Libya, being the area of origin for 19% of all IDPs identified in Round 4. An escalation of conflict in the Sirte and Misrata regions has led to an increase of displacement in the first two weeks of May.

As a result, while 54,879 individuals were identified as displaced from Sirte in Round 3, this number has increased by 49% in Round 4, currently standing at 81,674 individuals. IDPs from Sirte are currently being displaced to Bani Waled, Abu Salim, Tarhuna, Tripoli, and Al Jufrah. 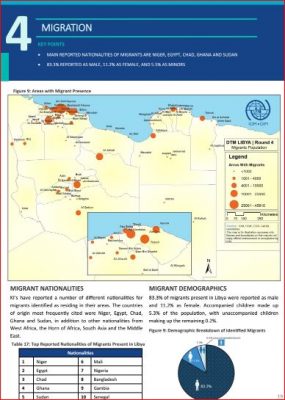 The areas hosting the most IDPs are Benghazi, Bani Waled, Ajdabiya, Al Bayda, and Abu Salim.

Ongoing conflict in many parts of Libya has produced new displacements during the Round 4 reporting period.

Growing insecurity with the escalation of the military conflict in Sirte between forces loyal to the Government of National Accord and Da’esh militants has led many of those living in Sirte to flee to neighbouring areas since the beginning of May. As the conflict continues, there is a concern that further displacement will take place in the region.

Other issues exacerbating Libya’s displacement crisis include a limitation in basic public services being provided by the government, including the extension of electricity, clean water, and basic infrastructural repair; economically, the country is facing high inflation and cash liquidity constraints.

Limitations on the amount of cash Libyans can access, combined with delays in the payment of salaries to public service employees and a rise in informal market activity, has rendered many basic and necessary items such as food and rent unaffordable for many of those displaced.

This has also placed additional pressure on host communities, which are having difficulty in obtaining such items to meet their own needs let alone the needs of the IDPs they host. While no significant tensions have been reported between IDPs and the communities hosting them, humanitarian organizations have indicated that the increased stress might make these relations unsustainable in the long-term. While the central bank has been extending credit and printing bank notes to ease this constraint, concerns continue about the sustainability of such policies. 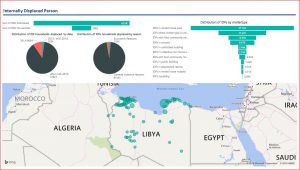 Communities hosting IDPs have reported a need for such items as refrigerators to keep food from spoiling and water cold, needs which become particularly apparent now during the warmer summer months and the Ramadan season. Fuel shortages and poor road conditions have made it difficult to transport food and other items between cities.

On returnees, there were 258,025 individuals (51,605 households) that were identified as returning to their areas of origin. The top five areas that returnees were observed to have returned to since 2015 were Al Mayah, Azzahrah, Benghazi, Al Aziziyah and Sawani Bin Adam.

The most frequently cited constraints slowing down returns include financial problems due to liquidity constraints and inflation in the markets. Many neighbourhoods also need to be cleared of landmines before any returns can be made possible.

The demographic data suggests a young IDP population, with half of those sampled being below the age of 18. The male-female ratio of those surveyed was nearly evenly split. 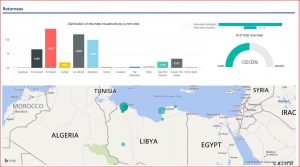 At the same time, large parts of the country are experiencing a restoration of calm following the cessation of conflict or signing of reconciliation agreements between different factions. As a result, an increasing number of returnees has been recorded by DTM’s Mobility Tracking.

Returnees face the additional challenge of reconstruction and repair of their communities. Some neighbourhoods where conflict has ended continue to await demining, corpse management and pest control teams to undertake work there, before further returns can be safely facilitated.

Meanwhile, there were 264,014 migrants that were identified as residing in 316 different locations across Libya, of which 3% are reported to be residing in detention centres.

The DTM has reported that it has expanded the baseline for this latest report on that established in the previous round (3), increasing coverage from 452 to 516 locations surveyed in Libya. 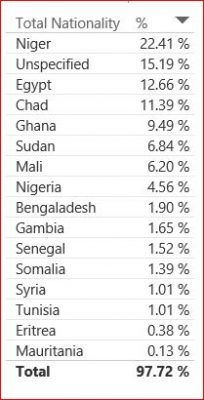 The top nationalities of migrants in Libya

There are 264,014 migrants residing in Libya, an increase from the 234,669 identified in Round 3. Of those, an estimated 3% are being held in detention centres.

The DTM defines a migrant in Libya as anyone who does not possess Libyan nationality. It does not differentiate between migrant statuses, length of residence in the country, or migratory intentions; as such, findings on migrants may include persons who originate from refugee producing countries.

Being a country of destination, circular migration and transit, Libya is characterized by complex migrant routes and movements. DTM’s methodology is oriented to identifying the most vulnerable of migrants, the report adds. 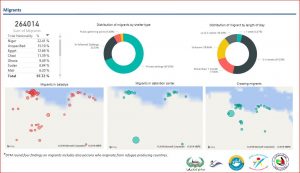 The most frequently reported nationalities of migrants residing in Libya are those from Niger, Egypt, Chad, Ghana and Sudan.

The complex dynamics of Libya lend themselves to a high level of migrant mobility. Migrants often travel through several parts of the country, and are considered to be transiting through an area if they have spent less than one month in it. Dirj, Msallata, Ain Zara, Sabha, Garaboli, Brak, and Alzintan were identified as the areas with the highest number of migrants travelling through.

During May, several maritime incidents that occurred in the western coastal areas of the country highlighted the limitations in the capacity of actors involved in Search and Rescue in Libya. This is constraining their ability to optimize the safety and effectiveness of their operations, the IOM report says.

How IS is surrounded in Sirte