IS being squeezed in Sirte in three-way pincer movement 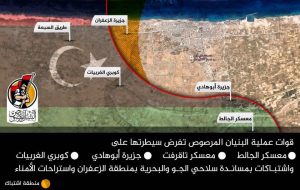 The . . .[restrict]IS/DAESH forces occupying the central Libyan city of Sirte since February 2014 are slowly being squeezed in a three-way pincer movement from the west, south and east, the Tripoli-based Bunyan Marsous Operation Room reports. They report that IS are on the retreat.

The three-pronged attack is by forces now allied to Faiez Serraj and his Presidential Council (PC)/Government of National Accord (GNA). They represent in the west the Misratan-led forces and from the east the Petroleum Facilities Guards (PFG), who have recently allied themselves with the Misrata-led forces.

The Misratan-led forces today report that they are now just over 5 km from central Sirte, which is 450 km from the capital Tripoli, after reaching the Zafaran roundabout.

The Operations Room today put up videos purporting to show them at Abuhadi roundabout in the south and Aljaalet barracks south of that. They claim they have progressed as far as Gharbiat bridge in the south west and Taghreft barracks.

On the coastal road western front, the Operations Room reports that fighting is continuing today at the Zafran roundabout involving ground forces, the airforce and the navy which has involved the heavy bombardment of ISpositions

The effort has come at a cost in terms of loss of life with at least 150 deaths reported. Only today, 6 deaths and 30 wounded were reported by Misrata hospital.

The GNA-allied forces made up of various militias groups led by those from Misrata, reported having to constantly deal with booby-trapped/IED by left by retreating IS, including in vehicles.

The Operation Room’s Media Centre had previously reported that air support has helped ground troops reach the Gulf Power Station, Wadi Jarf and surrounding village where residents welcomed them. They reported that IS had fled the fighting arena. The Media Room said that IS were unable to resist the heavy artillery and air bombardment, resorting to booby-traps/IEDs. [/restrict]

Migrants will not be returned to Libya: EU’s Mogherini