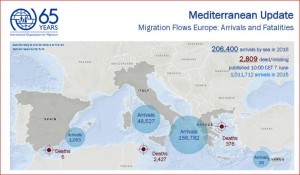 The latest . . .[restrict]IOM report reveals that Libya is still the main Mediterranean departure point for migrants and says there has been an increase of departures from Egypt due to Libya becoming ‘’too dangerous’’ for migrants.

The report comes on the back of statements by Libya that it will not be accepting any illegal migrants back into Libya – even if they had departed from Libya.

The latest IOM report on migrants and refugees published Monday further reveals that an estimated 206,400 migrants and refugees entered Europe by sea in 2016 up to 5 June, arriving in Italy, Greece, Cyprus and Spain. No fatalities were recorded in the Mediterranean since Saturday, 4 June, it reports.

With regards to the Friday, 3 June shipwreck off Crete that departed from Egypt, the IOM now fear some 320 migrants and refugees remain missing based on testimony received from survivors whom IOM staff were able to interview in the Italian port of Augusta after their rescue. The 320 missing are presumed drowned.

The IOM reports that the number of passengers aboard the vessel that foundered at sea was between 648 and 650 men, women and children. Both numbers were mentioned. Migrants told IOM they were sure of the number “because smugglers counted them twice a day before departure.” 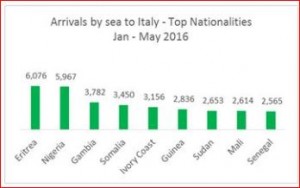 Others said their boat carried 150 women and about 20 accompanied children, said to be between six months and ten years old.

However, Libya is mentioned when it comes to departure points. “Libya is still the main departure point of the majority of migrants, but we are also seeing an increase of numbers of migrants sailing from Egypt,” said Federico Soda, Director of the IOM Coordinating Office for the Mediterranean in Rome.

“Every year arrivals from Egypt represent 10-15 percent of the total, but it is a flow that usually starts with the good weather. This year we have registered arrivals from Egypt also during the first months of the year. They include Egyptians, Somalis, Sudanese and Eritreans.”

Moreover, its noteworthy that even migrants now consider Libya too dangerous. ‘’According to some testimonies gathered by IOM staff, some of the migrants coming from East Africa also passed through Egypt in order to avoid Libya, which is considered currently too dangerous’’, the IOM report revealed.

According to Soda, the number of minors is also rising. In 2015 by the end of May 4,566 minors had arrived in Italy by sea. Some 3,058 were unaccompanied. This year there are 7,567, including 7,009 unaccompanied. Nearly half of them (3,274) came from Egypt, Gambia, Guinea, and Côte d’Ivoire, which together only accounted for some 500 of unaccompanied minor arrivals in 2015.

Meanwhile, the UNHCR has reconfirmed its position on the EU desire to return migrants to Libya. It told Libya Herald today, ‘‘We oppose forcible return to Libya (including for third country nationals), and we currently do not consider Libya a safe third country and we do not consider that Libya meets the criteria for being designated as a place of safety for the purpose of disembarkation following rescue at sea’’. This position is also held by MSF and HRW.

These confirmations come on the back of Libya’s internationally recognized Government of National Accord (GNA) stating clearly over the weekend that it will not accept the return of migrants departing from its territory. It says those who enter Libya illegally with documents and visas must be returned to their country of origin.

Mark Micallef, Executive Director of Migrant Report told Libya Herald today that ‘‘The position taken by the GNA isn’t surprising, it is more or less consistent with the stand Libyan politicians have always taken’’.

On sending migrants back to Libya, Micallef said that ‘‘From a humanitarian perspective sending back potential asylum seekers to Libya is not acceptable. Aside from the legal consideration that Libya is not signatory to the international conventions which would guarantee access to asylum, it is patently obvious that the country is currently and in the foreseeable future not in a position to be considered a ‘safe country’’.

‘’Many private Libyan organisations small and large, like the Libyan Red Crescent, are doing admirable work to assist migrants as best they can, but there is nothing like an effective Libyan State that could guarantee that the human rights of any migrants pushed back to its territory. Neither is the GNA or any other political interlocutor, for that matter, able to guarantee humane treatment of migrants’’.

On the conditions in Libya in which migrants are being held in, Micallef said ‘‘We know from visits to detention centres across the country that the conditions faced by people detained in Libya are dire’’.

‘‘In most cases detention centres are over-populated, lack basic sanitary and medical requirements, and crucially offer no possibility of redress to detainees who might feel wronged in one way or another’’.

‘‘Under the present circumstances, the EU cannot and must not contemplate push back as part of its strategy to manage migration’’, concluded Micallef. [/restrict]