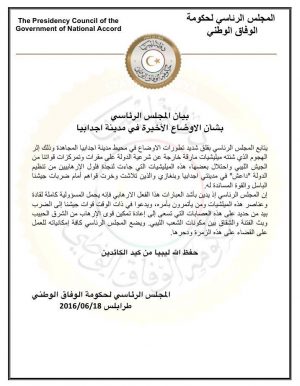 Responding to yesterday’s attack on the industrial zone in Ajdabiya by militants from the “Benghazi Defence Brigades”, the Presidency Council in Tripoli has condemned it while the House of Representatives (HoR) in Tobruk has declared a state of emergency, putting the entire area from Tobruk to Ben Jawad under military control.

In a statement last night, the Presidency Council strongly condemned the incident, describing those who attacked the Man Made river project in Ajdabiya as a “ terrorist militia” intent of destroying the project. It also stated that the group were remnants of the so-called Islamic State and other extremists who had variously fled Benghazi, Sirte and Ajdabiya after being defeated.

Subsequently interviewed by Libya’s Channel TV station, the defence minister in the Presidency Council’s Government of National Accord, Mahdi Al-Barghathi, reinforced this, but stating in this case that the attackers were remnants of Ansar al-Sharia. They were terrorists, he said, and would be opposed. His ministry, he added, would provide support to any military units that fought terrorism providing they rallied around the GNA.

Meanwhile, the president of the HoR, Ageela Saleh, has declared a state of emergency and created a military zone from Tobruk to Ben Jawad – vitually all north Cyrenaica. He has appointed Abdul Razzaq Al-Nazhuri as military governor.

Nazhuri is officially Chief of Staff for the HoR, but with Khalifa Khafter over him as the HoR’s general commander of the Libyan armed forces, his position is limited. Making him military governor, effectively of Cyrenaica, appears to give him a more hand-on role.

Stretching the military zone to Ben Jawad, just some 50 kilometres east of the Wadi Al-Ahmar (the “Red Valley” and the border with Tripolitania), has the potential of provoking a fight with the Petroleum Facilities Guards (PFG) of Ibrahim Jadhran. This may be intentional.

The PFG are the main body of troops under the Ajdabiya-Sirte operations room set up by the Presidency Council and Ben Jawad is now firmly under PFG control having been liberated by it from IS at the beginning of the month.

The LNA yesterday accused Jadhran of helping the Benghazi Defence Brigades to enter Ajdabiya, although there is no evidence to that effect.  Jadhran’s forces appear to have kept aside from the fighting.

Italian charity to supply humanitarian and medical aid to Fezzan