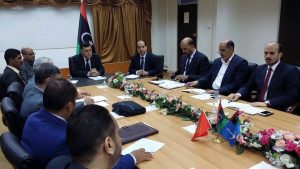 Whether they jumped or were pushed, four ministers chosen to be part of the Government of National Accord are today out of a job. Their departure seems bound to further delay the new  government’s approval by the House of Representatives .

The GNA issued a statement saying that none of the four had taken up their duties. Under a 2010 regulation, officials who fail to assume their responsibilities after 30 days can be fired. The GNA’s announcement was ambiguous. It may be that the men’s resignations were requested and duly delivered, or that they were fired and then chose to resign.

All four of them are from the east of the country.  It is unclear whether they were boycotting the government for political reasons or had not relocated to Tripoli because of security concerns.

The Presidency Council now faces the ticklish job of finding four new ministers. After its first proposed government was rejected by the HoR as being too large, prime minister-designate Faiez Serraj and his colleagues had to start again. The challenge was to arrive at a distribution of ministerial jobs that satisfied the competing regional and factional claims for a slice of power and influence.

The PC will be aware that until satisfactory replacements can be found, the HoR will be able to claim that it does not have an up-to-date GNA line-up on which to vote.

As Serraj wrestles with the currency issue, the loss of his finance minister might seem a blow. But the reality is that the current liquidity problems are being handled by the united efforts of the Beida and Tripoli Central Banks.

The Justice, Economy and Reconciliation portfolios will be of key significance when the GNA is finally voted into office. The Justice brief is particularly sensitive as Serraj comes under international pressure over to act on widespread human rights abuses. The International Criminal Court is being  urged to mount investigations but to do this, it will need to work  closely with the Justice ministry.