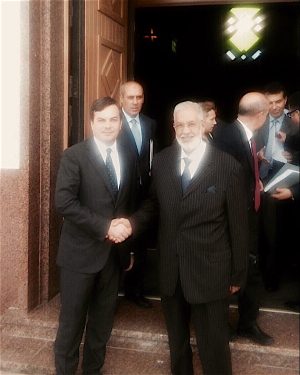 The undersecretary at Italy’s foreign ministry, Vincenzo Amendola, was in Tripoli today for talks with members of the Presidency Council, the Government of National Accord (GNA) and the State Council.

Arriving this morning at Mitiga airport, Amendola met internationally-recognised prime minister Faiez Serraj and other members of the Presidency Council at Bu Setta naval base before heading off to the foreign ministry for talks acting foreign minister Mohamed Siala. These, Amendola later tweeted, centred on the fight against terrorism, dealing with human trafficking and bilateral relations.

Also at the foreign ministry, Amendola  had separate talks with the acting transport minister, Milad Matouk.  In their presence, the Libyan Civil Aviation Authority and ENAV signed a strategic agreement to restart and develop air navigation services.

The Italian chargé d’affaires, Andreina Marsella, has been in Tripoli for the past ten days preparing today’s visit.  According to an Italian foreign ministry statement, the visit “opens the way to a strengthening of bilateral consultations with Libya in all sectors of activity, from an economic and infrastructural field to the healthcare, transportation and local government”.

Italy has become one the GNA’s most active supporters. It has accepted for treatment some of those wounded in the GNA’s Bunyan Marsous operation against the so-called Islamic State in Sirte. It has also provided medical supplies for hospitals in Tripoli as well as in Benghazi.