Presidency Council say charges too serious for Saif to be pardoned 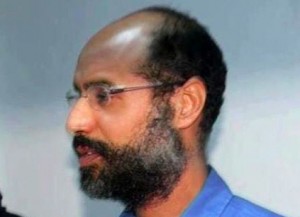 The Presidency Council has weighed into the alleged release of Saif Al-Islam warning that he remains subject to Libyan and international claims that he committed crimes against humanity. In a statement issued today, the PC said that there could be no amnesty for such accusations.

“These charges do not lapse with the passage of time”, it said, “and are not subject to general or specific pardons, as per international conventions and international law dealing with human rights”.

It is being claimed that the Ministry of Justice in Beida issued a pardon, though the provenance of the document has been questioned. There has been no formal comment from the government of Abdullah Al-Thinni.

Al-Ajmal Al-Atiri, commander of Zintan’s Abubakr Al-Siddiq battalion has insisted that Saif has been freed but refuses to say where he is “for security reasons”. A British lawyer Karim Khan, who has represented Qaddafi’s second son and heir apparent, has also said that Saif is indeed free.

But the Zintan municipal council has flatly denied the claim.  There have been unconfirmed reports that this week there has been a confrontation between Atiri’s militia and other Zintani forces. An Italian reporter claimed this April that he had been told by townsfolk that Saif lived under comfortable house arrest, had taken a wife and had a three year old daughter.

The PC said that it found Atiri’s statement very strange and irresponsible. It rejected the idea that anyone accused of such crimes, whether under the former regime or since the Revolution, could “escape punishment”.

The PC made no reference to the guilty verdicts and death sentences passed down to Saif and seven other Qaddafi regime figures in Tripoli in July last year.

It suggested that if Saif had been freed, then it might have been for personal gain. Such an act, it said,  destroyed the rights of victims seeking justice.

The PC added that it valued Zintan council’s statement denying that Saif was at liberty. It said that his case was an issue of Libyan sovereignty. The GNA would give it its full attention, to ensure that criminals did not escape justice.

The PC also said that it was ready to cooperate with international organisations, especially the International Criminal Court, in so far as international conventions did not conflict with Libya laws.

If Atiri has in fact liberated Saif, then he has thrown down a direct challenge to the ICC and its chief prosecutor Fatou Bensouda. This May she was threatening him with reprisals if he did not hand over Saif to the court in the Hague.

There remains however incredulity about the release. One foreign diplomat who has been following the case said that all his information was that Saif was still being held. Another told this newspaper that the reports did not make sense. “Where could he go, unless he wants to somehow get himself into the hands of the ICC?  If they found him guilty, he would only get jail, not a firing squad”.