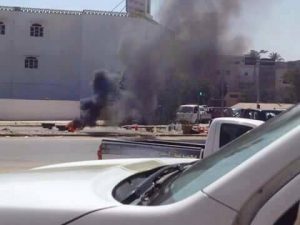 Armed protestors, mainly from Suq Al-Juma, forced their way into the Libyana and LTT headquarters on Tripoli’s Triq Al-Shatt (“Coast Road”) this morning reportedly demanding that the operators cut the mobile phone and internet service to Misrata. They are angry at the power outages in the capital, now running at up to 15 hours a day.

The continuing lack of cash in the banks is also one of the complaints.

Having stormed the buildings, the protestors forced employees to leave.

“We suddenly heard lots of angry voices and guns shooting in the air in the car park,” Samira Ghati, a Libyana employee told the Libya Herald. “There were ordinary people from the nearby Souq Al-Jomma, lightly dressed but with Kalashnikovs in their hands,” she explained.

Everybody had evacuated the place, she said. “We don’t know if it’s going to be possible to be able to go for work tomorrow,” she added.

The protestors, who blocked the road outside with burning tyres and rocks, are reported to have demanded that Libyan and LTT block mobile and internet services to Misrata, blaming it for the lengthy outages in Tripoli. They claim that Misratan forces had forced electricity producer GECOL to ensure the supply to Misrata at the expense of the capital.

In fact, there are power outages in Misrata, but not as long as in Tripoli.

It is further reported that the demonstrators also forced their way into the nearby Bu Setta naval base. However, if they were intending to take their protest direct to the Presidency Council and the government of National Accord, they were a day late. Faiez Serraj moved into the prime ministry building on Triq Al-Sikka (Railway Road) yesterday.

There has been no attempt to take over the other main mobile phone service supplier, Al-Madar, so far.