Libya’s archaeological heritage among the world’s most endangered 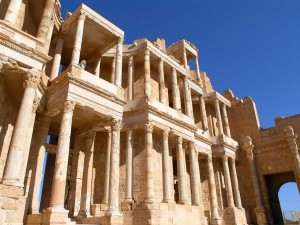 Some ten percent of the world’s most threatened heritage sites are in Libya UNESCO has warned.

Cyrenaica, Leptis Magna, Sabratha, the old town of Ghadames and the rock-art sites of Tadart Acacus are all at serious risk, said the UN body’s World Heritage Committee said in Istanbul at its annual meeting.

UNESCO explained that damage had already been inflicted by armed groups at or near the sites. It feared that worse could follow.

The organisation did not mention the willingness over the years of guides to the Acacus rock paintings to throw water over the precious remains, in order to make them more visible for tourists.

UNESCO called on the international community to protect the sites. It did not however make clear how this might be done.

It warned that there were 54 sites world-wide that were in jeopardy.

Cyrenaica alone holds a more extensive range of classical remains than even Greece itself.  The remains of Sabratha and Leptis Magna can rival any Roman ruins in the world.

UNESCO said that it had placed the five Libyan sites on its most threatened register because of the damage that has already been sustained and the serious threat of further destruction that they faced.

This Istanbul meeting did not speciifally address the continuing problem of the smuggling of historic artefacts from Libya.

Members of the Qaddafi regime frequently plundered museums for choice pieces. Since the Revolution, museums around the world have been put on the alert to look out for stolen items.  However, the flow of smuggled artefacts from Libya continues. Last year an Italian curator told this newspaper that it was private collectors who represented the greatest danger to Libya’s priceless archaeological heritage.