Rockets attacks continue in Benghazi: airport and clinic among targets 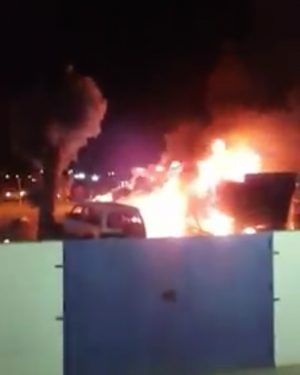 Militants continued yesterday and today to target strategic as well as residential locations in Benghazi.

A women and two children were injured last night when a rocket exploded next to the ear, nose and throat clinic by the Arab Medical University in Buhdeima district. Reports also suggest a local man was also among the injured. It is not known if the target was the clinic or the nearby Benghazi Medical Centre (BMC), to which the injured were taken.

Several rockets have been fired at the BMC over the last weeks.

The ENT clinic was part of Hawari hospital but relocated to a villa next to the university when the hospital had to close.

Meanwhile, in a rocket attack in Sidi Younis district, in the north east of the city, nine people were injured: six Libyans and three Egyptians. The area is home to a significant number of Egyptian workers, both legal and illegal.

Today, for the third day in a row, a grad missile landed outside Benina Airport. The airport or, more likely, the adjoining airbase, is believed to have been the target.