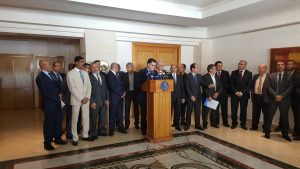 Faiez Serraj after reporting to the Libya Dialogue in Tunis (Photo: UNSMIL)

There can be no alternative to the Libyan Political Agreement Presidency Council chief and prime minister-designate Faiez Serraj averred today in Tunis during a marathon second day of the Libyan Dialogue.

Members have been meeting primarily to consider a unified military command and to look for a way around the blocked voting in the House of Representatives. The latter is holding up the validation of the Government of National Accord and the changes to the Constitution Declaration. These would allow the control of the armed forces, as well as of the Central Bank National Oil Corporation and the Libyan Investment Authority to be vested in the Presidency Council.

In the rooms around the meeting at the Tunisian capital’s luxury Golden Tulip hotel, there was frequent comment that the obstacle in the way of further  progress was HoR president Ageela Saleh who had consistently stopped a free parliamentary vote on the changes. Saleh has incurred financial sanctions from the UN as a result.

Serraj and six members of the PC came out of their session with the Dialogue members and gave a bullish presentation. “ The discussions have been frank, transparent and open” he said, “ We have discussed all the challenges facing the GNA and we have agreed on future coordination and meetings to find solutions to tackle all these issues”.

Serraj said that there had been key discussions on the lack of electricity and cash in the banks together with diminished oil production.  He is clearly aware that the lack of bank liquidity and the crippling power cuts have served to undermine Tripoli’s support for the PC since it sailed into the capital at the end of March.

The schedule today suffered from the delay of the eight-strong Misratan delegation yesterday who only arrived at 4pm. Ambassadors were invited to arrive at 3pm today for a final briefing, but the session was put off repeatedly until just after 9pm. One wearily waiting diplomat told this newspaper it was a pity that the Dialogue could not have been meeting this time in Tripoli, a thought echoed on social media, where posts have mocked the need to meet away from Libya.

However President Barack Obama’s special Libyan envoy, Jonathan Winer, who has been present throughout the two-day meeting, commented that Libyans faced the choice of finger-pointing or coming together on solutions to deliver essential and security across the country.

Besides hearing from Serraj and his PC colleagues, the 22 Dialogue members present in Tunis were due to discuss the prospects for a unified Libyan army. UNSMIL chief Martin Kobler last week floated the short-term solution of having three regional commands for the armed forces, a proposal that was seen by some as entrenching existing armed divisions. However, there was no time for this debate today. The Dialogue is reconvening for an extra day tomorrow.

Members of the Constitution Drafting Committee who yesterday unveiled the final draft of the new constitution this afternoon presented the document to the Dialogue. But CDA member Omar Mohamed Ali said “ They were very appreciative, but I don’t think many of them had time to study it”.