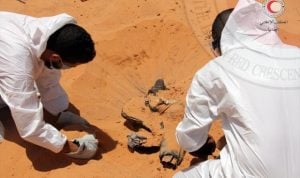 A mass grave with up to 15 bodies has been discovered outside Ajdabiya. The find, 18 kilometres to the south of the town, contained at least one corpse wearing a uniform.

The exhumation was begun by members of the Red Crescent and soldiers from the 152 Infantry Battalion, who had told by people in the town of a mass-burial. It is unclear when the bodies were buried nor how they died.

Ajdabiya CID has begun an investigation and is seeking to identify the dead. There has been speculation that the grave dates from the Revolution.