Tripoli as a kidnap capital 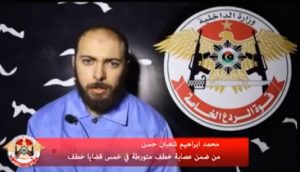 A kidnapper confesses this week to RADA (Photo: RADA)

Tripoli is fast becoming a kidnap capital as police report more than a dozen abductions in the just a fortnight, in two of which the abductors killed their victims. Among those seized is a 14 year old girl. Another man was tortured by his captors. Ransoms of up to LD500,000 have been demanded.

People have been seized on the street, from their homes or in their cars.  In every instance listed by the Tripoli operations room in the 14 days to last Thursday, the crimes appear to have been entirely mercenary, with no political overtones.

In some cases, such as the abduction of Naji Elforjan of Suq Al-Juma, anxious relatives have  no idea where the victim is because the kidnappers have yet the make any contact.

The parents of the seized 14-year old, Rabia Mahmoudi, have been told they must find half a million dinars or their daughter were be killed.

However, the  kidnappers are not having it all their own way. RADA security forces have made some arrests in the course of this year. The latest detentions this week were of a gang of four. RADA posted the men’s confessions on their social media site. The men admitted to a number of abductions and implicated each other as being involved.

It would seem likely that the current police list is incomplete. Kidnappers generally impress upon relatives that a victim will be murdered out of hand if the crime is reported to the authorities