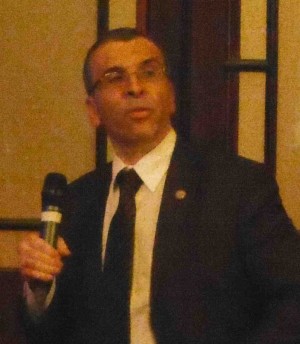 In the strongly-worded letter, a copy of which was seen by Libya Herald, Sanalla said that he was ‘’dismayed’’ by Kobler’s meeting with Jadran who in nearly three years had cost Libya ‘‘over $100 billion in lost oil revenues’’.

Sanalla said that Kobler was ‘‘either ignorant’’ or that Kobler had ‘‘set almost unbelievably low standard for your [his] achievements in Libya’’. He added: ‘’For you to associate yourself and the United Nations with one of most despised individuals in the country will severely tarnish your reputation, and that of the United Nations. Your job in future will not be made easier by this step’’.

Furthermore, the NOC chairman said that he was dismayed at Kobler and the UN for ‘‘providing recognition’’ to Jadhran as ‘’it sets a terrible precedent and will encourage everybody who can muster a militia to shut down a pipeline, an oilfield or port to see what they can extort’’.

The Tripoli NOC chairman said that Jadhran was ‘‘entirely malevolent’’ with ‘‘no national (Libyan) interest’’ and motivated by ‘’what’s good for Jadhran’’.

Sanalla warned that the NOC in order to protect itself against legal claims will not lift force majeure and warned that If the Serraj-led Presidency Council/Government of National Accord or UNSMIL supported Jadhran, they could be liable in courts.

It will be recalled that after Kobler’s meeting with Jadhran, who only controls Libya’s eastern coastal oil ports and terminals, tribal leaders who claim to control the actual inland oilfields and pipelines, distanced themselves from any agreement that could emerge between Kobler and Jadhran.

They warned Kobler that if he wished to restart oil production from eleven of Libya’s main eastern oilfields, he needed to talk to them directly. They pointed out that Jadhran controls ports and terminals, but no actual oilfields.

Moreover, the tribal leaders pledged their allegiance to the Tobruk-based House of Representatives and its Interim government led by Prime Minister Abdullah Thinni. Jadhran, on the other hand, was reported by Kobler to recognize the internationally-recognized Tripoli-based and Serraj-led Presidency Council and Government of National Accord.

The international community are determined to increase Libyan oil production. They see increased Libyan state revenues as one of the key means of enabling the Serraj government to solve the myriad of Libyan acute problems. These include  fighting extremism, solving power, water and internet cuts, reducing the state deficit, high prices and inflation, solving the bank cash crisis, internally displaced etc.

It is not clear why Kobler decided to meet Jadhran publicly in such a high profile manner and provide him with implicit international recognition, and weather he already understood that for Libyan oil production to be ramped-up, wide and inclusive agreement has to be reached with many tribes and power centres. May be Kobler wished to establish Jadhran’s starting bargaining position, or he was delivering a message to Jadhran.

Either way, a narrow agreement that will ‘’buy out’’ Jadhran in order to the restart oil production is unlikely to succeed. It may only highlight the leverage or extortion capabilities of other disgruntled power centres near any or all of Libya’s oil facilities.

An agreement that excludes some power centres may only create further disaffection and invoke a negative, destructive reaction. It may encourage spoilers to copycat the very actions that gained Jadhran his high profile Kobler visit.

The Kobler-Jadhran visit has served to highlight the complexity of the current post-Qaddafi era Libyan politics with its multi-polarity and multi-layered power centres all capable of acting as centrifugal forces. it highlights that no

In the absence of a strong Libyan central state with a monopoly on legitimacy and a monopoly on the legitimate use of force, the smallest of Libyan militias can and has been able to exerted a totally disproportionate amount of leverage on national Libyan politics.

The letter sent by Tripoli NOC chairman Mustafa Sanalla to UNSMIL chief Martin Kobler is reproduced below in its entirety:

I learned yesterday with dismay of your meeting in Ras Lanuf with the head of the Petroleum Facilities Guard for the Central Region, Ibrahim Jadhran. I understand you are about to announce an agreement to open the ports Jadhran has blockaded for close to 3 years at a cost to Libya of over $100 billion in lost revenue.

NOC board dismayed because you are providing recognition to an individual who has caused more damage to the country than any other. It sets a terrible precedent and will encourage anybody who can muster a militia to shut down a pipeline, an oil field, or a port, to see what they can extort. You may be aware that 30 young men of student age shut down Hariga port this week for several days. They were copying Jadhran tactics. He is an entirely malevolent influence, with no concept of a national interest. His only motive is what is good for Jadhran.

I understand the Presidency Council will pay to Jadhran a substantial sum of money to open the ports. At the same time, Fathi al-Majburi, Jadhran’s ally on the Presidency Council, who is in charge of budgetary distributions, has withheld payments to NOC and its subsidiaries. (NOC subsidiaries do not earn oil income. NOC finds, produces, sells and ships oil, but all revenues go to the Central Bank. Our operational costs are met out of national budget funds). This shortfall has now reached the point where meaningful volumes of oil production are being lost. A payment of LYD 250 million was made to NOC today, but it will make very little difference, since it comes after weeks of broken promises from the Council, and is only a fraction of the backlog in payments of LYD 1.4 billion.

My only conclusion is that you are either ignorant of the consequences of what you are doing, or you have set an almost unbelievably low standard for your achievements in Libya. Let me explain what I mean in more detail.

First, if you are banking on Jadhran’s good faith, you are making a mistake. His entire operation is a fraud. He has held oil exports hostage before, extorted quite incredible sums of money, and continued to keep the ports closed even after he was paid. He uses this money to buy political allies. You are strengthening one of the most baleful actors in the country.

Second, everybody in Libya knows what Jadhran’s game is. For you to associate yourself and the United Nations with one of most despised individuals in the country will severely tarnish your reputation, and that of the United Nations. Your job in future will not be made easier by this step, I can assure you. It is not a step forward for Libya. The revolution of 2011 did not take place so the country could fall into the hands of criminals like Jadhran. The credibility of the international community is already under stress and this is would be a further very damaging blow.

Third, the workers at some NOC subsidiaries are already asking NOC management why money is being paid to Jadhran, while money to keep the oil fields producing — including to cover basic necessities of potable water for workers in the fields to drink — is not being paid. Of course, I cannot answer this question. The larger part of the operational expenses of our subsidiaries goes to pay international service providers; NOC has liabilities to these entities and at some point they can choose to seize NOC assets (such as oil cargoes) if payment is not made. But the immediate problem, if the payments to Jadhran go ahead at the expense of the oil sector, is going to be with the workers in the oil fields.

Earlier this year, Jadhran allowed the ports he is occupying (and supposedly protecting) to be substantially destroyed by Daesh. As a result, I do not expect to see export volumes from these ports to rise above 100,000 b/d any time soon. This is about the same increase we would see from AGOCO, one of NOC’s producing subsidiaries, if its legitimate, budgeted expenses were paid by the government. To pay Jadhran instead of AGOCO makes no sense, politically, economically or legally.

Which brings me to my fourth point. The force majeure in effect on the export of oil from the ports blockaded by Jadhran is a legal measure imposed by NOC to protect it from liability to international partners. It cannot be lifted by Jadhran, or by you, or by the Presidency Council. If payments are actually made to Jadhran, that force majeure will not be lifted. It is highly possible Jadhran will face court cases internationally for losses that he has imposed on our buyers and partners by his blockade, and we, as NOC, are determined not to be attached to these lawsuits. If the Libyan government or UNSMIL supports Jadhran in this way, it would be very wise to ensure they, too, will not share liability for his previous actions, since you seem to condone them.

In closing, I want to remind you that NOC was one of the first state institutions to recognise the Presidency Council. Since then, we have met with virtually no reciprocal support. Instead members of the Council, and I put Mr Majburi at the top of list, seem intent on using their positions to capture NOC. If this continues for very much longer, and if payments are made to Jadhran at the expense of NOC’s operational needs, which inarguably serve the country much better, NOC will be one of the first institutions to derecognise the Council.

I am available to discuss this matter if you wish, either in person or by phone.