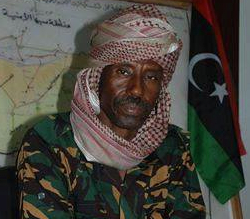 A top Tebu commander has died of gangrene while being treated in the United Arab Emirates.

Barka Warduko Al-Mahdi Murzuk died this evening following along struggle against leg gangrene despite receiving extensive treatment in the UAE over the last 12 months.

At the start of the 2011 Revolution Mahdi was one the earliest rebels in the south-west. He managed to quickly storm and control the strategic Waw Al-Namous army airbase on the Libyan-Chadian border and Al-Whigh airbase on the frontier with Niger.

In 2012 he played a key role in peace negotiations between Tebu and Awlad Suleiman fighters in Sebha and later that year between fighting Tebu and  Zuwai militias  in Kufra.

According to a Tebu source, Mahdi was admired for his strategic savvy coupled with his religious example to his fellow fighters.

It is unclear if he will be buried in the UAE or flown back to be buried in Murzuk nor is it clear how he contracted the gangrenous wound that eventually killed  him.