IS claims suicide bombing in Benghazi 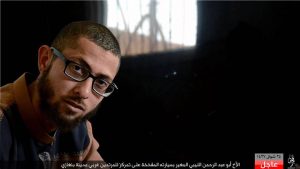 Ziyad Gergum as its suicide bomber according to IS

A suicide car bomb attack which yesterday killed two members of the Libyan National Army in Benghazi’s Gwarsha district and wounded another four has been claimed by the so-called Islamic State (IS). It named the suicide bomber as Ziyad Fawzi Gergum, posting photos of him and of the attack taken by a camera-mounted drone.

Funeral prayers for him were organised by the family today in Misrata where they have been living recently.

The family, however, are claiming that he was killed, not in a suicide bombing, but in a French airstrike. For its part, Sadek Al-Ghariani’s Tanasah TV said that he died in an operation carried out by the Benghazi Revolutionaries’ Shoura Council against the LNA.

Gergum himself, before the attack, posted a photo of Osman Bin laden on his Facebook page.

According to a source in Benghazi, he was a member of a relatively well-to-do local family involved in the shoe whole-selling business and was born in 1990. Following the revolution, when he was a member of the 17 February Brigade, he went to Syria where he was a member of Liwa Al-Umma under former Tripoli mayor Al-Mahdi Al-Harathi. Wounded there, he was taken to Turkey for medical treatment. He then returned to Benghazi where he joined IS but was wounded in Benina and sent this time for medical treatment to Misrata where his family joined him. Leaving them there after recuperating, he went to Sirte, remaining there for some time before returning to Benghazi where he remained until yesterdays’ suicide operation. 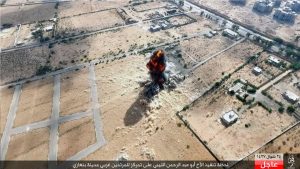 IS drone photo of the supposed suicide attack