UN Special Envoy Martin Kobler has said that he is “utterly shocked” at the killing of 14 men in Benghazi who bodies were found dumed in a rubbish tip in Leithi district yesterday. “This is a war crime”, he tweeted today, adding that he wanted an immediate investigation.

“Those responsible must be held accountable and brought to justice,” he added. 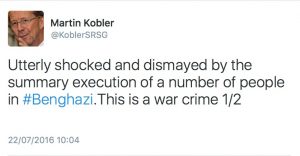 The victims are said to include a number of people from Leithi, including the imam at the local mosque, Abdullah Al-Fakhri. A father of three, he was also the local marriage registrar.

The other bodies are said to be those of:-

The list may not been wholly acurate. A relative of the Jazwis told the Libya Herald that while the family had been firm supporters of Ansar Al-Sharia and the father and one some had been killed, two other sons were in Tripoli. He did not specify which two.

The killing of Al-Fakhri has particular angered and upset many Bengahzi residents. He was popular and seen as a good, hardworking imam.

Tripoli as a kidnap capital