US confirms Sirte airstrikes against IS at GNA’s request 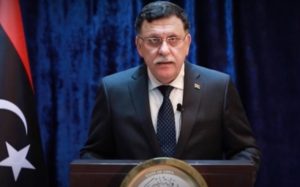 Prime Minister-elect of the Presidency Council and Government of National Accord, Faiez Serraj confirmed in a TV broadcast today that the US airstrike against IS in Sirte was requested by Libya (Photo: PC/GNA).

The United States today confirmed that it had carried out strikes against IS in the city of Sirte at the request of the Faiez Serraj-led Presidency Council/Government of National Accord (PC/GNA). The US statement revealed that additional US strikes will continue to target IS in Sirte.

It is thought that the Americans targeted the Ougadougou Conference centre which is built of heavily reinforced concrete and which Bunyan Marsous forces have been unable to destroy or enter. They have been  prevented from progressing against the Centre due to IS snipers.

In an official statement, the Pentagon confirmed that ‘‘Today, at the request of the Libyan Government of National Accord (GNA), the United States military conducted precision air strikes against ISIL targets in Sirte, Libya, to support GNA-affiliated forces seeking to defeat ISIL in its primary stronghold in Libya’’.

‘‘These strikes were authorized by the president following a recommendation from Secretary Carter and Chairman Dunford. They are consistent with our approach to combating ISIL by working with capable and motivated local forces’’.

‘‘GNA-aligned forces have had success in recapturing territory from ISIL thus far around Sirte, and additional U.S. strikes will continue to target ISIL in Sirte in order to enable the GNA to make a decisive, strategic advance’’.

‘‘The U.S. stands with the international community in supporting the GNA as it strives to restore stability and security to Libya. These actions and those we have taken previously will help deny ISIL a safe haven in Libya from which it could attack the United States and our allies’’.

Both Britain’s ambassador Peter Millett and US Special Envoy to Libya Jonathan Winer welcomed the action by the ‘’international coalition’’ against IS.

Winer added in a tweet ‘’US military action reinforces our call for all parties in Libya to work through the GNA and focus on the threat from IS. US military makes clear US help to Libya in Sirte limited to strikes and information sharing. US forces will not engage in ground operations’’.

Italy also warmly welcomed the US strikes in a statement tonight.

Prime Minister-elect of the Presidency Council and Government of National Accord, meanwhile, confirmed the Libyan request to the US for the air strike in a televised address.

‘‘Today, the first of these strikes began on specific locations in Sirte causing huge losses in the lines and assets of the enemy, enabling our field forces to control strategic locations’’.

The Bunyan Marsous Operations Room confirmed that the strikes hit targets including a T-72 tank. They report that 354 Libyan troops have been killed and more than 2,000 wounded since the start of operations against in Sirte.

Meanwhile, Mohamed Ghasri, the spokesman for the Bunyan Marsous Operations Room revealed today that an IS commander was arrested while trying to escape from Sirte by sea.

Speaking at a press conference he confirmed that the international community (American) intervention was in total coordination with the PC/GNA and Operations Room in an effort to get rid of IS.

On the other hand, it will be recalled that there were demonstrations in various cities of Libya when news of French participation in operations in the east became apparent after the shooting down of a helicopter they were in.