Moscow tones down criticism of US strikes in Sirte, calls for anti-terror coordination 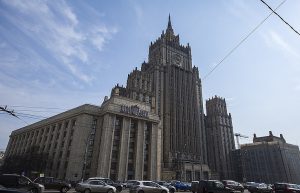 Russia has responded to the US airstrikes on Islamic State (IS/Daesh) targets in Sirte with a call for closer international coordination in the war on terror. But such action must keep to international law, it said.

“Russia has always advocated the need for decisive action to destroy Daesh and other terrorist groups, wherever they may be, in strict compliance with international law,” the Russian foreign ministry said today, adding that “we believe it is fundamentally important to establish solid coordination among all states engaged in the fight against terrorism”.

The statement represents a shift in Moscow’s position. Earlier, Russian news agency Interfax reported the Russian ambassador to Libya, Ivan Molotkov, describing the US airstrikes as illegal. It also quoted him saying that there was no prospect at present of lifting the UN arms embargo on Libya.

In the later version, however the foreign ministry noted that US operation in Libya had been carried out on the request of the Presidency Council “headed by Prime Minister Fayez al-Sarraj” (as Tass news agency described him).

In its response, the Russian Foreign Ministry also called on all Libyan political bodies to end their disagreements and support the Libyan Political Agreement for the benefit of the Libyan people.

“This will allow to continue the political process launched in the Moroccan city of Skhirat which envisages forming state institutions, including army and police; ensuring security, law and order in Libya; effectively countering the terrorist threat,” the foreign ministry added.

The call for coordination reflects the fact that in Syria, the Russians have been carrying out repeated airstrikes against IS and other opponents of fighting the Assad regime. Yesterday while US planes were targeting IS in Sirte,  Russian planes were bombing what it described as “militants” in Aleppo.