Opposition to US raids bring unusual Ghariani and Hafter alignment 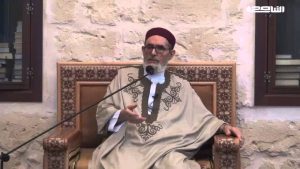 In a rare demonstration of similar thinking, arch enemies Sadek Al-Ghariani and Khalifa Hafter have both come out firmly against Monday’s US air attack on the so-called Islamic State in Sirte.

Describing it as “illegal” at a press conference yesterday, Ahmed Mismari, the spokesman for Hafter’s  Libyan National Army’s, claimed that the air raid had been carried out for US electoral purposes to help Democratic candidate Hillary Clinton. It would be the LNA that liberated Sirte, he insisted.

For his part, Dar Al-Ifta head Sadek Al-Ghariani, who leads the hardline Islamist alliance against both Hafter in the east and the Presidency Council in the west, likewise called it illegitimate, coming his closest to endorsing the so-called Islamic State. Asked on his Tanasah TV station why international intervention was acceptable in 2011 but not in the fight against IS, he said that non-Muslim military help against Qaddafi in 2011was legitimate because he was not a true Muslim and not following the Sunna (the Way) of the Prophet. However, raids now were illegal because what was happing in Libya was a conflict between local people who were all Muslims.

This comes despite his previous backing for the Misratan-led Bunyan Marsous operation against IS and its welcoming of the American attacks.

Members of Kara’s RADA forces were carrying out crimes against revolutionaries from Benghazi, he alleged, seizing and arresting them. Kara, he said, had to clarify his position on this. If he did not, people in Tripoli would rise against him, he suggested.

Ghariani’s latest attack on Kara, whom a week ago he ordered to release jihadists held at Mitiga airbase, reflects the deepening division in Tripoli between the hardline Islamist grouping for which he acts as the symbolic figurehead and the alliance of forces around the Presidency Council which includes Misrata and the Bunyan Marsous Operations Room.