“Final assault” due on IS in Sirte 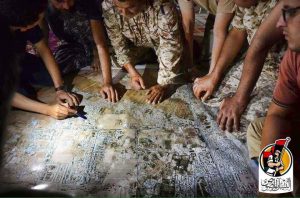 A command planning meeting ahead of the “final assault” of IS in Sirte (Photo: Bunyan Marsous)

There are reported to have been four further US airstrikes on IS positions in Sirte today though the Bunyan Marsous media office has not confirmed the raids  The attacks once again apparently targeted sniper positions.

Sources close to the operation were denying that any BM fighters had been killed or injured in the attacks.

The key point being made in Misrata and Tripoli has been that the drive the destroy IS terrorists trapped inside Sirte was entering its final stage.

“The countdown to the final stage of the military operations against Daesh has begun,” a BM statement said today, adding “The operation’s leaders held intensive meetings to prepare for the final and decisive battles to eradicate the Daesh [IS] gang from the city of Sirte”

There has been speculation that the US airstrikes have so far been aimed at knocking out enemy positions away from the main terrorist redoubt in the Ouagadougou Centre. Once IS fighter have been driven back to the centre itself, is being assumed that it will be subjected to devastating attacks.

The US intervention, widely reported to be assisted in targeting by UK special forces on the ground with BM fighters, comes at a time when the dead and injured among the predominantly Misratan militiamen has reached disturbing levels. On 31 July Misrata Hospital said that 340 men had been killed and 1,600 wounded in the assault.  However other medical sources have said that the number of dead and injured is in fact higher but they gave no precise figure.